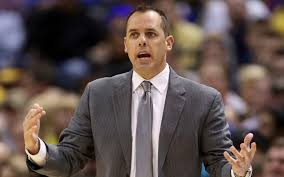 Frank Vogel is not just an effective leader who wins, he’s a good guy. Check and check! Put him on the list!

Yesterday, I posted a list of 12 coaches of Indiana teams who stand about the rest.  People expressed outrage, frustration, disappointment, and occasional agreement that their favorites were omitted.  Some of the names – Knute Rockne, Doc Councilman, Hobie Billingsley, Frank Leahy, Lin Dunn, Muffet McGraw, and even Notre Dame fencing master teacher Michael DeCicco.

One name I included caused some distress – Indianapolis Colts coach Chuck Pagano, now in only his third year.

Other than the large number of Notre Dame honks who believe every single leader in the history of the university is by definition a great coach, the biggest surprise was that Indiana Pacers coach Frank Vogel got virtually no support at all as someone who should have been included.

It seems impossible, but Vogel is in his fifth season as the coach of the Pacers and will become the franchise’s all-time leader in NBA games coached on March 7, when his ticker for games hits 329.  That will break a five-way tie of 328 games coached that includes Slick Leonard, Rick Carlisle, Larry Brown, Jack McKinney, and – very briefly – Vogel.

The record of 190 regular season NBA wins held by Brown will also fall toward the end of the season – maybe sooner if the Pacers keep rebounding like they did last night in Miami.

Vogel will also break the all-time record for number of NBA playoff wins if the Pacers get through the first round of the 2015 Playoffs and win one more game in the second round.

How can a list of 12 great Indiana coaches that includes three former Pacers coaches not have Vogel in a prominent spot?  What kind of idiot would leave him off?

Vogel is a guy who carries himself just a little differently from your average major league coach, and that is a good thing.  In fact, he’s one of the least coach-like coaches I have ever met regardless of the level.

He is a coach who actually makes the game about the development and instruction of his players – a normal guy with a good sense of humor who can float into a conversation among normal folks without trying to dominate it.  He’s likable, generous, and engenders trust among players, staff, and everyone else associated with the team.

I saw him at a Carmel football game six weeks ago, and he easily moved through the crowd without causing any disturbance.  He is normal, excellent, and by and large anonymous.

Unlike predecessors, there is no one within the Pacers organization who has anything negative to say about Vogel – AND he wins.

Yesterday’s list of coaches was assembled to celebrate people like Vogel who not only win, but win while retaining their humanity.

Click here to finally go to a great dentist to get your teeth fixed – Dr. Mike O’Neil, Today’s Dentistry

His resume’ is incomplete, as is Pagano’s, so including a Colts coach while allowing Vogel to drift south of Leonard, Brown, and Bird on the list was silly.  I corrected this for the radio show yesterday by including Vogel and Pagano as a single entry at #8 because we just don’t know what historic wake they will leave in Indianapolis once their respective eras end.  That is insufficient.

The list now has 13 names, and Vogel is in his rightful place above all in Pacers NBA history.  He will soon be there in many other categories, and will likely obliterate every Pacers NBA coaching record.

Shame on me for not including Vogel, and shame on everyone else for not demanding that I should have.