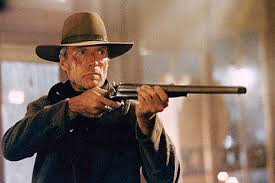 The Cleveland Browns didn’t deserve to lose like that, but in the NFL as in Unforgiven, deserve’s got nothing to do with it.

Clint Eastwood said it best in Unforgiven, “Deserve’s got nothing to do with it.”

Games are played and occasionally the undeserving team wins.  That was the case today for the Indianapolis Colts in Cleveland.  They were sloppy, unfocused, and unworthy of a 25-24 road win against a 7-5 team.

That happens in the NFL from time to time.  Teams go through the highs and lows of a season, and the good ones manage to win the games they should while the great ones find a way to win games they shouldn’t.  The Colts made their case for great because they were able to win a game they shouldn’t have against a good team.

Quarterback Andrew Luck looked baffled until it mattered most. Reggie Wayne appeared to age before our very eyes like Alec Baldwin and Geena Davis in Beetlejuice.  And beleaguered cornerback Josh Gordy wrapped up the game with an interception.  Weird game.

Nine times out of ten, the Colts would lose this kind of game.  Four turnovers – two for touchdowns, and one that led to a field goal – are a lot for any team to overcome.  The Colts defense was stout against the flawed game management and wayward long throws of quarterback Brian Hoyer, but because they maintained a lead for the majority of the game, Johnny Manziel was never asked to put down his clipboard to provide a needed dose of unpredictability.

Luck led the Colts in rushing again, and minus the eerie second half excellence of T.Y. Hilton that vexed the Browns (how hard is it to cover a team’s most dynamic weapon?), the offense was virtually inert.  Hilton caught nine balls for 142 and two TDs in the second half, and that brought home a much needed winner against a team they don’t want to have to play again in January.

Quibbling about math after a win like that the Colts enjoyed today seems petty, but coach Chuck Pagano deciding to go for two while down 21-16 with over four minutes remaining in the third quarter represented some questionable strategy.  Rolling dice that led to the Colts being down five rather than four was silly, and thankfully caused nothing negative for any but those who bet the Colts -3.

The win could prove a great advantage for the Colts, who are on the brink of another AFC South title, and need wins to improve their seed for the playoffs.  With games left at home against the Houston Texans, and road tilts versus the Dallas Cowboys and Tennessee Titans, the Colts have a chance to slide up beyond the #3 slot they currently occupy due to their win and the Cincinnati Bengals loss.

With a #2 seed, the Colts earn a first round bye which this group could use, given the effort being exerted to handle their business against the Browns – now a likely observer come January for the 15th time in the 16 year existence of this incarnation of the NFL’s most historically woebegone franchise.

Reggie Wayne’s streak of consecutive games with three or more receptions ended with a thud today, but he tied Peyton Manning for the Colts record in all-time games played with 208 and wins with 141.  While it’s sad to watch how the skills of the once great Wayne have eroded, no Colts fan is going to have a lasting memory of what Wayne looks like today, and they shouldn’t.  Wayne is doing everything he physically can to play at the highest level he can, and should be admired, not admonished for his Sunday efforts.

The Colts will need to do a better job of protecting Luck if he is going to continue to eclipse Manning’s records, and more importantly to take another step forward in the postseason.

But first thing’s first – with three games left, a trip to the playoffs is not assured.