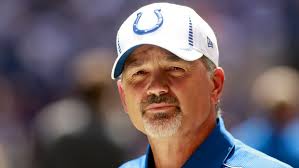 Hard to tell whether Chuck Pagano deserves credit for the Colts record, blame for their sloppiness, or a substantial helping of both.

The Indianapolis Colts are turning the ball over at a strangely high rate, have enjoyed limited success in any discipline of the game other than throwing the football, and continue to win and win and win and win.

Their major league basketball brethren appear no more lacking in talent, but have now lost eight straight despite getting healthier as the season has worn on.

Andrew Luck’s vaunted offensive unit has turned the ball over 12 times the last four games, but the Colts have managed to win all four on their way to clinching a ninth AFC South title in 13 years.

Criticizing the Colts for winning seems silly, but expecting success in the postseason as the team squeaks by squads quarterbacked by Tom Savage, Brian Hoyer, Colt McCoy, and Blake Bortles ignores the evidence contained in those victories.

The Pacers began unraveling on a west coast trip prior to the 2013-2014 All Star Break, and despite finding the mojo needed to vanquish two playoff foes before succumbing against the Miami Heat in the Eastern Conference Finals.

“There’s some selfish dudes in here,” was the quote from center Roy Hibbert during the latter stages of last season, and the two guys to whom Hibbert might have been referencing are both gone – Lance Stephenson to Charlotte and Paul George to injury.  Yet, the Pacers appear to be a shell of their former selves.

We keep hearing that the Pacers are still within shouting distance of the eight seed in the East, but the truth is that while they are four games out of the postseason, they are also 4 1/2 games out of the cellar in the NBA.

If Pacers president Larry Bird was presented with a reality where the Pacers were led in scoring by Rodney Stuckey, rebounding by Lavoy Allen, assists by Donald Sloan, and steals by C.J. Watson, he would likely guess that 7-17 might be a pretty decent guess as to the team’s record.

This season, the Colts have beaten the Jaguars and Texans twice each, Tennessee, Washington, Cleveland, Cincinnati,Baltimore and the NY Giants.  Losses have come at the hands of the NFL’s elite – New England, Pittsburgh, Denver, and Philadelphia.  Their -4 turnover margin ranks 21st in the NFL and suggests that the Colts should be sporting a far more mediocre record, but they keep winning despite themselves.

So how do the Colts keep winning regardless of their obvious flaws and proclivity for committing damaging turnovers that lead directly to opponents’ points scored?  Andrew Luck makes plays when aggressively attacking a defense, the defense with Vontae Davis in the lineup is functional (and sometimes better), and the special teams have been spectacular.

Adam Vinatieri has yet to miss a single kick this season, and Pat McAfee has been a positive field position machine as both the punter and kickoff specialist.

If the Colts were any good at all at holding onto the ball, they would be in a position to be feared as a potential Super Bowl participant.  Yep, greatness from special teams, Andrew Luck, Vontae Davis, and T.Y. Hilton, plus solid work from Mike Adams, Jerrell Freeman, Coby Fleener, and Anthony Castonzo is enough to win the AFC South.

No such luck for the Pacers, who are in no position to be feared, respected or successful.

Stephenson screwed the pooch by trying to overthink the obvious decision to stick around at the place where management had his back and tolerated his quirks, and George was the victim of some bad luck in suffering his broken leg.

Lance’s signing with the Hornets represents one of the few times when a free agent leaving hurt everyone involved.  The Pacers aren’t as good without Lance.  The Hornets are furiously working the phones to move him.  And Lance, who thought he was very clever in negotiating the mutual out after two years in his three-year, $27 million deal (which as a result is actually a two-year, $18 million deal), is playing his way into exile.

These two teams have suffered a simultaneous backslide, but the negative results have only befallen the Pacers.