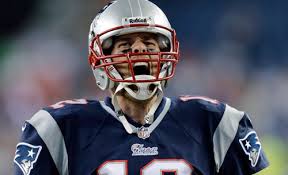 I finally have a reason to like Tom Brady – he makes idiot activists angry.

Dropping a series of self-directed F-bombs during a violent football game where lives and fortunes can change with one hit seems to be a reasonable response to adversity.

Tom Brady is one of the marquee players of America’s game, and cameras/microphones are trained on him throughout every game he plays, and when he steps sideways, millions of fans see him do it.

So when Brady explodes in anger once in awhile and uses language few would share with family over Christmas dinner, it should not be a surprise.  And yet, three people complained to the Federal Communications Commission when Brady did just that.

Hunter S. Thompson always said that when people complain about noise, get louder and eventually they will stop complaining.  The time has come for Brady and everyone else with access to a live microphone to use it to shout down the easily wrinkled rubes who bitch about obscenities.

The glass half full response to those three complaints is, “Well, only three people out of a few million watching the game were compelled to jump through the hoops necessary to lodge a formal complaint, and that’s less than the number who committed a murder during the same game, so maybe we’re okay.”

I look at it differently because for those three malcontent anti-obscenity zealots, there are likely another million or more who were sincerely offended by the use of a simple if vulgar word that was intended only for Brady’s own ears.

My Dad used to explain his lack of racism by saying that there were a bunch of reasons to dislike a man before noticing the color of his skin.  If the biggest problem a viewer of any TV program has is the language audible during the program, there is something seriously wrong with that viewer.

Sadly, some of those who are offended feel so strongly that they believe changing the channel is not enough.  They believe it is their right to yelp and crow so loudly it causes the government to prohibit the behavior that bothers them.

Activism is an American tradition with deep roots that has brought cultural changes throughout history – some great and long-overdue like the Civil Rights Act of 1964.  Others have been wrongheaded and shortsighted like the Volstead Act that prohibited the manufacture, sale and use of alcohol.  The unintended consequence of the Volstead Act was the creation of massive wealth for organized crime.

For whatever reason, people like to think that adjusting the behaviors of others because of their distress is a reasonable hobby.  In the area of language, activism is an absurd and bizarre extension of our need to inject our own morality into others.

On HBO, Showtime, Cinemax, the Movie Channel and other pay cable channels, all manner of R-rated emissions spew forth, and our society continues to click along without interruption, but when Tom Brady curses himself on Fox or CBS, people fly to their stationary to fire off indignant missives to the government because, well, it – whatever ‘it’ is – just has to stop.

Forget that the practical effect of the F-word being used on network television is – well – there isn’t one.  Forget that every time Brady is sacked, the entire population of the northeast corridor of the United States yells that word right along with Brady.  Forget that the word’s etymology is as an acronym – “for unlawful carnal knowledge,” and has no religious connotation whatsoever.

If Brady yelled, “sexual congress out of wedlock!” the meaning would be exactly the same, and a perplexed public would continue to stare blankly at their TV.

While it’s sad that people allow themselves to become so agitated by a man using the f-word on TV, the overreaction of the federal government to those who are compelled to mollify and endorse the shrieks of the hysterics among us is truly pathetic.  The fines associated with the exposure of Janet Jackson’s boob over a decade ago during the Super Bowl halftime show were outrageous.

It’s said that we get the government we deserve.  We demand of government a level of behavior that is reactive to us, but at some point our government should shout back a little bit.  The FCC should yell at those who complain once in awhile, “Why don’t you just change the station?”

To be a nation of adults, some of us need to be treated as children.

As for Brady, I hope he keeps right on yelling until people stop complaining.