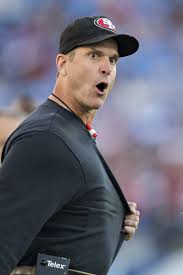 For an in-demand guy trying to get hired as a coach, setting the price is easy – leak an offer that may or may not be real for a job in which you have no interest.

Jim Harbaugh and the San Francisco 49ers are going to part ways after this season.  Under contract for another year, either Harbaugh is going to be traded, fired, or will resign at the end of the current season.

Rumors of management discontent with Harbaugh have been rampant for months, and now sources are providing media types like ESPN’s Adam Scheffer and the NFL Network’s Ian Rappaport with a very specific offer made to Harbaugh by the University of Michigan.

Every time the Michigan job opens – roughly every three years, Harbaugh’s name is bandied about as a candidate.  Harbaugh passes, and Michigan throws money are a guy who doesn’t provide the longterm solution they seek for what used to be an elite job.

The last program from north of the Mason-Dixon Line to win a national championship was Ohio State in 2002, and last time I checked, Michigan is way north.  Recruiting to Ann Arbor is not like talking a kid into pledging Gainesville, Baton Rouge, Tuscaloosa, Starkville, Athens, Knoxville, Austin, Norman, or Los Angeles.

Harbaugh is no idiot.  As much as he fondly remembers his time in Ann Arbor playing for Bo Schembechler, he is a pragmatist at heart, and knows that Michigan’s fan base has expectations that will be impossible to reach.  That means failure is a certainty, and the termination countdown will begin as soon as he signs the deal.

The New York Jets, Oakland Raiders, and Chicago Bears will be looking for a coach in less than two weeks, and ownership of all three franchises now know Harbaugh’s price.

That was the point of the leak, and Harbaugh’s rumored consideration of Michigan is a negotiating ploy and nothing more.

Harbaugh will stay in the NFL, and Michigan will settle (again) for a coach who take a payday to fail in Ann Arbor.

One thought on “Not buying Jim Harbaugh’s six-year, $49 million offer from Michigan – or his interest”