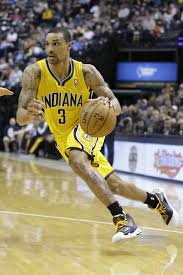 George Hill was back, and so were my eyeballs from the beginning to the end of last night’s win.

NBA Basketball is a weird game.  Paying close attention is sometimes difficult.  My mind wanders when it appears that the minds of the players wander.

Last night, I watched the Indiana Pacers beat the New Orleans Pelicans from start to finish because they appeared to be engaged for the full 48 minutes.

George Hill came back from injury to lead the Pacers with 15 points, but his scoring total was only circumstantial evidence of his contribution.

There was a defensive intensity and awareness that didn’t otherwise exist very often in the first 28 games of the season that Hill missed.  Sometimes you don’t know what was missed or how much you missed it until it returns.

Hill is like that.  He’s the ingredient that your mother-in-law leaves out of her marinara sauce recipe because she wants her son to love her’s best.  Hill is the agitator that makes the Pacers congeal – or at least that was the case last night.

Of the five starters in the past two Eastern Conference Finals teams for the Pacers (Roy Hibbert, David West, Paul George, lance Stephenson and Hill), Hill was the fifth guy in the minds of the media and fans.  Last night, Hill showed what smart basketball people have known for a long time – Hill is the key to the Pacers success.

When Hill attacks offensively, all of a sudden everything works in Frank Vogel’s offense.  When he’s not around or lays back a little, the Pacers stagnate and become an easy beat.

The Pacers shot exactly 50% (39-78) last night as they sent the Pelicans home with a loss.  All nine Pacers who played filled important roles.  Each scored between six and 15 points while taking between five and 13 shots.  Hilbert had seven blocks, and the team assisted on 24 field goals.  Lavoy Allen was a steady pro as always with eight points and seven boards.

The Pacers are still without Paul George, a potentially elite talent who might be the piece of the puzzle to make them a very dangerous out in the East when he returns, but today they are a competent team with the parts necessary to compete with anyone.

With Hill, they have that ingredient that makes the ingredients harmoniously co-exist.  Now they can expect to compete on a nightly basis, and fans won’t know exactly why, but they will be able to watch the Pacers from tipoff to buzzer most nights.

At 10-19, the Pacers have dug themselves a hole from which it will be hard to climb, but with sad sack  opponents like Detroit (4x), the NY Knicks (4x), Brooklyn (3x), and Philadelphia (3x) comprising better than 25% of their remaining schedule, the Pacers might just be able to get to the eight-seed.

Could Hill really be that important to the success of the Pacers?  Could it be that he’s missed in equal proportion to the potentially stellar Paul George?  I think so, and the Pacers better hope so.

I like watching the Pacers, and now my mind is much less likely to drift because theirs won’t.