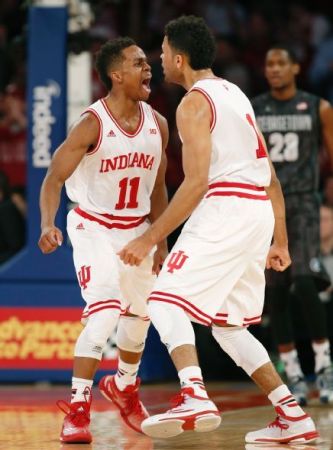 Indiana’s Yogi Ferrell and James Blackmon enjoy a moment of revelry during an afternoon that ended badly for the Indiana Hoosiers.

Indiana Basketball continues to tantalize and taunt in equal measure.

Talent and scheme show stretches that give fans reason for hope, then moments of borderline incompetence have fans on their feet screaming at the TV or court.

Is Indiana a team on the come, or are they as mediocre as many thought when the season started?  Does coach Tom Cream know what he’s doing, or is he being bailed out by sporadically excellent shooting?

If the Hoosiers finished the non-conference portion of their season 12-1, we would suspect they are capable of a return to the NCAA Tournament, and then with shooters like they have maybe a run to the Sweet Sixteen or beyond would be more than a dream.

If Indiana was 8-5, fans would know the exact opposite.

But at 10-3, the season could still fall in either direction or continue to hover in the middle.

Of the Hoosiers 87 points, 83 were scored by James Blackmon (22), Yogi Ferrell (27), Robert Johnson (11), and Troy Williams (23).  That lack of depth will make them easy to defend when Big Ten play starts, or will it?  Maybe the overall excellence of Ferrell and Blackmon, the burgeoning athleticism and productivity of Williams, and the steadiness of Johnson will be vexing for opponents.

Expectations are unclear for the Hoosiers and their fans, and maybe that works to Tom Crean’s advantage.  If people felt IU should finish in the top five of the Big Ten and they fell short, fans would call for Crean’s head.  If there was no reason to believe something good could happen, fans would say that Crean was not delivering on the promise to restore relevance to the university’s signature marketing unit.

Somewhere in between, nobody knows exactly what to think.  Is the program showing promise or backsliding?  It’s impossible to tell.

Indiana exists somewhere on the success continuum between collapse and triumph, but exactly where is beyond our ability to pinpoint.

After wins against Butler, Pitt, and SMU, and losses to Georgetown, Louisville, and Eastern Washington, I am baffled.  After watching Michigan lose to NJIT and Eastern Michigan, Michigan State drop one to the perpetual road dogs from Texas Southern, Nebraska lose to Incarnate Word, Hawaii, and Rhode Island, and Purdue fail against Gardner-Webb and North Florida, I am bamboozled by the entire Big Ten.

Indiana’s Big Ten schedule appears to be kind in that the Hoosiers will only be required to play Wisconsin (the prohibitive favorite to win the conference) one time and get two swipes at bottom-feeder Rutgers.  But they also must play #15 and #21 Maryland and Ohio State twice and Michigan only once.  Again, an unclear future awaits.

The way the schedule lays out, a 5-7 start to the Big Ten season for Indiana is possible, but then because the Hoosiers’ last six games are vs. Minnesota, vs. Purdue, @Rutgers, @Northwestern, vs. Iowa, and vs. Michigan State, they could still finish 11-7 – which would certainly cause additional confusion for a fan base fond of clarity.

For those looking to this website – one that takes pride in providing concrete answers – I apologize for not having a clear and definitive resolution.  Indiana Basketball is a stew where one bite can be satisfying and delicious while the next is putrid.  Today’s game was a perfect microcosm.

If clarity is going to come for Indiana fans objectively evaluating this program and its future course, it won’t be before March.

9 thoughts on “Indiana loses to G-town in OT – finish non-conference at 10-3; future far from clear”