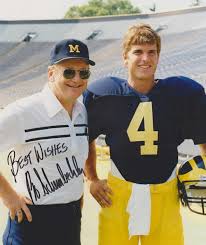 Jim Harbaugh fills all of the qualities Michigan fans want in a coach, and most that fans of those who hate Michigan want too. It’s a win-win!

There have been a few times among a long line of accurate predictions where I have erred, and Jim Harbaugh agreeing to become the head coach of the Michigan Wolverines has made me as wrong as I have ever been about anything.

To the end, I said over and over that until the ink dried on the contract teams in the NFL would continue their efforts to woo him, and someone would come with a crazy offer that would keep Harbaugh from going to Michigan.  Tonight, the Detroit News is reporting that the ink on the deal is dry.

Finally, I have to admit I am wrong.

Harbaugh is known as a pragmatic and cagey negotiator, and I assumed that the leak of the Michigan offer (six-years, $49 million) was Harbaugh’s effort to establish a bidder for his services and give NFL teams a base level for the bidding.

After all, Harbaugh’s San Francisco 49ers qualified for three straight NFC Championship games before this season’s 8-8 record.  There aren’t many coaches in the history of the NFL that can boast a four year run the likes of which Harbaugh just concluded.

Harbaugh leaves the NFL with the fifth highest winning percentage in the history of the league, behind only Guy Chamberlain (who coached four different teams during the 1920s), John Madden, Vince Lombardi, and George Allen.

That the 49ers decided to move on without Harbaugh is inexplicable.  That 31 other teams allowed him to go to Ann Arbor is insanity.  The Bears are going to hire someone who will succeed at a higher level than Harbaugh?  Doubt it.

Factor into his one failure of a season injuries to Patrick Willis, Navarro Bowman, and Glenn Dorsey, and suspension of Aldon Smith and it’s not hard to figure out how 8-8 might have happened.

Michigan got themselves a hell of a football coach, Harbaugh got paid in bulk, and the Big Ten became relevant again as a football conference.  The drama of the upcoming blow by handshakes between Harbaugh and Ohio State coach Urban Meyers will give fans something to talk about for entire offseason.  It’s a win-win-win!

Does anyone believe Harbaugh is going to hide his disdain for all opponents?

Today was a great day for Michigan fans and the Big Ten – as good a day as the news of the hiring of Mike Riley at Nebraska signified a step sideways if not backwards for that storied program.

The prodigal son returns to Ann Arbor, and relevance returns to the Big Ten.  That winning at Michigan is damn near impossible is a topic for another day.  This is a time of hope for those who enjoy a little college football talk that doesn’t include rants from haywire SEC honks with delusions of importance.

My being wrong is a bitter pill to swallow, but it’s well worth the fun and abrasiveness the irascible Harbaugh will bring to college football played north of the Mason-Dixon Line.