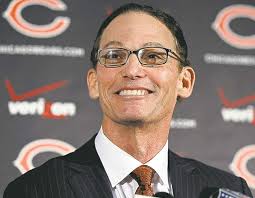 Marc Trestman was fired this morning – not because the Bears failed to win in 2014, but because they failed to manage expectations.

Roughly 25% of NFL and NBA coaches are fired at the end of a typical season, but that almost never happens in Indianapolis because franchises here are well run by consistent, prudent, and mostly trusting owners.

The Indianapolis Colts have enjoyed a rarely achieved level of consistent quality and results while the Indiana Pacers continue to build and rebuild without overreaction to fleeting struggles.

The last time a coach was fired by the Colts was Jim Caldwell after the 2011 season when a broom swept the front office clean – including Bill Polian, the longtime czar of the football operations.  The Pacers last changed leadership when Jim O’Brien was asked to pack his things almost four years ago.

It happens a little bit more often for the Pacers as evidenced by the longest coaching tenure in the history of the franchise being 328 games – or four full seasons (achieved by Slick Leonard, Jack McKinney, Larry Brown, and Rick Carlisle).

Why is Indianapolis immunized to the perils of Black Mondays in their various sports and teams?  Fans here don’t allow themselves to be duped into false hope, which leads to irrational expectations, followed by failure.

Colts fans understand what this team is – good, but flawed.  They are able to win the AFC South, but not good enough to represent the AFC in the Super Bowl.  Because the Colts have played in a couple of Super Bowls over the past decade, they know what a potential championship team looks like, and this isn’t it.

While the expectation is that the Colts will beat the Cincinnati Bengals, only the most optimistic devotee entertains the notion they will have any chance to compete against the New England Patriots in Foxboro the following weekend.

Way too many flaws for anyone to hold coach Chuck Pagano accountable for not getting to the AFC Championship Game.  Just three years ago, the Colts had the worst record in the NFL, and three straight 11-5 seasons since beats the hell out of what has happened in Atlanta, New York (with both NFL teams), Chicago, Tampa, Nashville, Jacksonville, Oakland, and many other outposts where better than what was delivered was hoped for.

The Pacers are a bit different.  After two straight trips to the Eastern Conference Finals, Paul George suffered a broken shin bone that will cost him the entire 2014-2015 season.  How can Frank Vogel be expected to overcome the loss of the team’s superstar?  Even a 35-win season, while disappointing, would be well within the range of tolerable outcomes for Pacers fans.

The key to holding on to a coaching job is managing expectations.

Bing Crosby was one of the most popular singers and actors in the 20th Century, and he always negotiated for the lowest billing possible because he never wanted to be blamed for a failure.  Coaches should learn from Crosby.  Tell the media that the team they coach will be lucky to win 30% of its games.  That may piss off management trying to hype the product to season ticket customers, but it will save jobs.

Not meeting expectations is the crime for which coaches pay, and in Chicago where coach Marc Trestman and general manager Phil Emery were fired this morning, the primary motivation for the change was that the media and fans in Chicago expected a playoff run out of a group incapable of winning because of the contract awarded to quarterback Jay Cutler.

Click here for info on the incredible $1 dental exam being offered by the best dentist in Indiana – Dr. Mike O’Neil at Today’s Dentistry

There was no chance for this group to thrive in an NFC North that includes very good teams like Green Bay and Detroit.  Because of a contract that paid Cutler more than any other NFL player in 2014, Chicagoans believed that he could play at that level.  Sadly for Trestman and Emery, Cutler was still Cutler throughout the 2014 season, and now Trestman and Emery are looking for work.

This is not true in Bloomington among Hoosiers fans who crave banners in Bloomington, which may be bad news for Tom Crean unless he can find a way to hang one soon.

5 thoughts on “Marc Trestman among those fired; Why Black Monday rarely comes to Indianapolis”