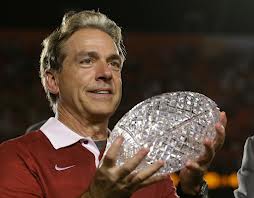 Cha-ching for Saban. For the players – back to class.

At the University of Alabama, head football coach Nick Saban is paid over $7,000,000 per year.  His assistant coaches earn an additional $5.2 million.  The support staff makes another $2.9 million.

Players get an education worth $12,591 (in-state) per year, and if they exercise some initiative to monetize their brand, the NCAA suspends them from participating.  The majority of that $12,591 is a pass through expense for which the university bears no true burden.

Those are the raw numbers as compiled and reported by CBS Sports Jon Solomon, and they speak to the growing chasm in earnings for the universities/coaching staffs, and student-athletes.

Somehow, the perception of coaches is that of reasonable and giving educators who are mentors first and earners second, while players are scurrilous and money-grubbing rascals who swap autographs for tattoos and food stamps when they aren’t shoplifting groceries.

A Michigan fan tweeted to me last night that Jim Harbaugh’s decision to sign as the new football coach with the University of Michigan wasn’t about the money.  Sure it wasn’t.  That’s why he’s going to make $8-million plus per year.  That’s damn nice of Harbaugh.  What a guy!

Harbaugh’s return to Michigan because of love for his alma mater is a heart warming act of generosity is really the story people in Michigan are buying?

The reason Harbaugh agreed to become the coach at Michigan is most likely that no NFL team was willing to step up and pay at the same level Michigan is.  To believe otherwise is invests hope that cash is not the overriding priority for coaches and schools.  All evidence points to the contrary.

Schools continue to oppose paying players not because of some pie in the sky ideal of amateurism and purity.  It exists because schools like keeping all the cash they can.

Coaches and administrators aren’t fools.  They know where the cash for paying players will come from – their pockets.  And before we start to blame the NCAA – they haven’t got a damn thing to do with it.

The NCAA is not an oversight organization.  It’s comprised of member schools run by administrators who are the very people who want to keep the money the profit center of football and men’s basketball provides.  NCAA president Mark Emmert isn’t empowered to make unilateral changes to the financial schematics of college sports.  Emmert acts on members’ wishes, and those wishes right now are to perpetuate the myth that somehow players not being paid is about decency rather than greed.

Paying people commensurate to their value is the construct that propels wealth in America, and it is embraced in every business but college athletics.  Sadly, that greed even extends to young men who seek to profit from the value of their own brand, and why is that?  The $10+ million Alabama reaps because of licensing is a pretty good explanation.

Public school bureaucrats can yelp all they like about the Pandora’s Box of unintended consequences that allowing athletes to sign autographs for cash would uncrate, but the sad truth is that the answer here is as it always is – people like to hold onto the cash they have and expect to have.

Football at Alabama is little more than a developmental wing of the NFL.  To assert the availability of an education is compensation enough for those athletes assumes they deserve no level of self-determination whatsoever, and they should simply be happy with the opportunity to spend four years of debt free living on a college campus surrounded by beautiful women and outstanding trainers and facilities.

I’ll buy that as soon as coaches are paid like professors, whose average pay is $97,800 at Alabama.  Pretty decent salary.  The reason that isn’t that good enough for Saban is the same as why tuition/room-and-board shouldn’t be good enough for Amari Cooper and Landon Collins.

2 thoughts on “At Alabama, football staff gets rich while athletes get a $50,000 education”