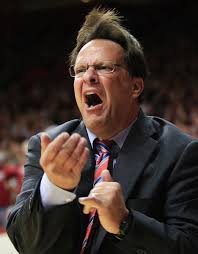 Whether Tom Crean is back in Bloomington for another year or not is the most anticipated piece of Indiana sports news likely to be revealed in 2015 – unless the Colts go to the Super Bowl. If that happens, this list will require a makeover.

There is a lot going on in Indiana sports, but nothing quite as compelling as predicting the future of people on the brink of success and failure, and it’s those stories that will captivate us in 2015.

10 – What the hell happened to Brandon Miller to cause him to decide to leave the Butler Basketball program?  That’s a big story.  Maybe fans and the media should just let it die, but curiosity needs to be fed, and everyone in Indy wants to know why a guy like Miller would bounce so soon after netting his dream job.

9 – Kevin Wilson is entering year five of his tenure as the football coach at Indiana, and the jury for many is still out on whether he is the right guy to lead this program from long smoldering ashes back to relevance.  His latest recruiting class might be his best yet, and filling the void left by the first 2,000 yard back in the long mediocre history of Indiana Football with UAB’s Jordan Howard might be the cherry on top that pushes IU into a bowl.  If not, is respectable failure enough to keep Wilson in Bloomington?

8 – Player options for David West and Roy Hibbert loom for the Pacers this offseason.  Given a lack of all-star level production this season while being a focus of the offense, it’s not likely that Hibbert will turn away from the $15,514,031 that awaits him in 2015-2016.  West’s $12.6M would also be hard to replace on the open market for a power forward who will turn 35 before camp opens.  Those decisions will determine the activity of the Pacers during the offseason, and also inform whether the Pacers will try to re-up with free agents Luis Scola, Chris Copeland, C.J. Watson, Lavoy Allen, Rodney Stuckey, and Donald Sloan.  Imagine where the Pacers would be this season without those six guys.  Better yet – don’t.

7 – Colts free agents – As I watched a replay of last season’s home win by the Indianapolis Colts over the Denver Broncos, I saw Pat Angerer, LaVon Brazill, Donald Brown, Darrius Hayward-Bey, Antoine Bethea, Robert Mathis, and other former Colts making plays.  It’s a reminder that rosters in the NFL are always in flux, and a lot of the key players for the 2014 Colts will not be back, (Mathis could return from his torn achilles).  Will Reggie Wayne call it a career?  Cory Redding, Darius Butler, Matt Hasselbeck, Mike Adams, Hakeem Nicks, and Wayne will all be free agents, not to mention the one-year contract types who may or may not be retained.  The Colts are going to look different next season.

6 – Why are Purdue fans not calling for Matt Painter’s head?  It’s likely that he simply fits as the coach of the Boilermakers.  I’m not sure that makes a lot of sense, but when you think about Purdue hoops, Painter is the guy seen as coach.  He embodies everything that is expected of a coach in West Lafayette.  Despite finishing two games under .500 each of the past two seasons, and playing beyond the Sweet Sixteen of the NCAA Tourney only twice since 1980, Boiler fans seem satisfied with the job Painter is doing.  Oddly, foreseeing a situation where athletic director Morgan Burke would fire him is difficult.

5 – Paul George’s ability to return to pre-injury health will be the big story of the offseason, preseason, and early regular season for the Indiana Pacers.  If George can come all the way back to be the player he was prior to the gruesome injury suffered during a scrimmage with Team USA last summer, the Pacers can contend immediately in a weak Eastern Conference.  if not, they will resume their search for the superstar needed to win an NBA Championship.

4 – Will the Colts seal a long-term extension with Andrew Luck a year prior to his free agent eligibility?  The answer to that question, and how the deal is structured, will determine how the roster is constructed in 2015.  If Jay Cutler was worth $22.5M in 2014, Luck’s value moving forward boggles the imagination.  If Luck demands a lot of cash up front that counts 20% of the Colts cap room, filling a roster with high quality championship caliber players is going to be very difficult.

3 – Ryan Grigson/Chuck Pagano future – An interesting counter to Indiana’s patience with Wilson story is what is going on with the Colts.  While Hoosiers fans are happy with any hint of growth, Colts fans may begin to see a ceiling on the progress of their team despite the maturation of the best young quarterback in the game.  Will the Colts seemingly relentless 11-5 finishes in a weak AFC South continue to satisfy fans always compelled to demand more?  If the Colts don’t qualify for the AFC Championship game on Sunday, will the currently quiet din of criticism for GM Ryan Grigson and Chuck Pagano grow louder, or is this consistent level of success enough to keep fans happy?

2 – Andrew Luck continues to do all the right things to project as an all-time great, and the best part of it is that none of it appears contrived to impress.  The next grade Luck will receive will come this Sunday in Denver.  If he can help the Colts advance to the AFC Championship game, this season will be seen as a step toward greatness.  If not, Luck taking his TD total from 23 to 40 from year two to year three will have to suffice.

1 – Will Tom Crean return? – A counterpoint to Painter is the continued lack of patience for Tom Crean among Indiana fans.  Just two years ago, Indiana was ranked #1 and headed to a #1 seed in the 2013 NCAA Tournament.  At that point, it looked like Indiana was back, and would be able to recruit high school kids from Indiana at a high level.  Arrests, suspensions, a head injury, questions about oversigning while IU promises to honor scholarships for four years, and last year’s 17-15 record have turned the Hoosier faithful surly.  Add to that a palpable feeling that Crean is simply not a great fit in Bloomington, and the rabble is turning restless.  A reported $12-million buyout might be too big a pill for IU to swallow if they entertain the notion of going all Michigan Football on this situation and targeting Brad Stevens in an effort to unite and ignite one of college hoops most rabid fan bases.