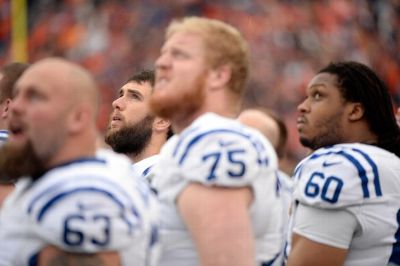 Andrew Luck listens to the National Anthem in the same spot where he operated successfully today – behind his offensive line.

This wasn’t quite like watching Alec Baldwin and Geena Davis withering in front of our eyes in “Beetlejuice,” but it was close.  Peyton Manning has gone from NFL MVP to less than competitive in the playoffs in less than one year.

Manning has now gone one-and-done nine times in the postseason, but this one was different.  After the Broncos first drive for a touchdown (aided by a Colts roughing the passer penalty on a third down that kept Denver from punting), Denver’s offense never sniffed the end zone.

At one point with the game still hanging in the balance, Manning scrambled to his right on a key third down play.  Rather than tuck and run for the first down when there was an acre of open space in front of him, he toss yet another incompletion.  That’s when it became clear that he was either a physical wreck or had lost his zest for competition.

Anyone in Indianapolis, the town where Manning spent the first 13 seasons of his career finding a way to win, knows that passion for winning is part of his DNA. So that leaves Manning as the owner of a carcass that no longer responds to his incredible will.

The result of that decline is a dirt nap for the Broncos season, and a trip to the AFC Championship for the Colts and young buck Andrew Luck, who statistically wasn’t much better than Manning.

People will talk about this game being a passing of a very bright torch from one quarterback who may one day be considered the best ever to play to another who might wear that mantle himself, and they are right.  Manning with his trademark grimaces and shrugs.  Luck with his smile and encouragement for teammates and opponents.

It wasn’t the numbers that showed the difference between these two; it was the command of Luck and the impotence of Manning.  The images were starkly different, and may lead to the retirement of Manning, whose only goal at this point should be championships and health.

Manning wasn’t the only aging warrior who may be enjoying his last tour during what otherwise has been a remarkable career.  Colts wide receiver Reggie Wayne was targeted once today with no catches.  For a future hall of famer, that level of irrelevance has to smart a bit, despite his team’s success.

So Luck moves on to another duel with the New England Patriots – this one with a trip to the Super Bowl on the line.  With Manning vanquished, now the challenge is to beat Brady into inconsequentiality.

After the show Brady put on last night in leading his Patriots past the Baltimore Ravens – the first time in NFL history a team has rallied from two individual two touchdown deficits – it would seem Brady will be less inclined to cooperate than Manning.

Beating Bill Belichick is going to require a different level of excellence that moving the ball against the rigid strategies of Broncos defensive coordinator Jack Del Rio, but at this point who believes Luck isn’t capable of getting this done?

The Colts and Andrew Luck took another step forward today, reaching a new level of postseason stakes for the third straight year.  Luck and this new version of the Colts will be seen by the media as a speed bump for Brady, Belichick, and the Pats to make another trip to the Super Bowl – their sixth together.

Oddsmakers have installed the Pats as seven-point favorites, and the early weather forecast is for mostly sunny skies and a high of 44 for game day.

Meteorology and gaming have something in common – until it happens, no one knows exactly what “it” will be.

For Manning fans, hope for a continuation of his routine greatness ended today.  For Luck, the march toward building the resume’ for which he appears destined to build continues.  For Brady, next week brings a new challenge from the guy who answers the question, “Who’s next?”