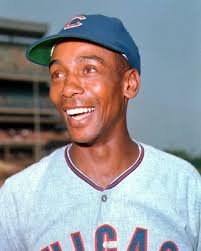 Ernie Banks was a genius of hope and glee. His relentless optimism will be missed.

When I was a kid, I thought Ernie Banks was the coolest man alive.  He got to play baseball for a living, and he always did it with a smile on his face.  Like few men or women who walk among us, we are better for his example.  Today, he died at the age of 83 without ever seeing his beloved Cubs win a World Championship.

Faith is a weird phenomenon.  We believe that anything is possible.  Whether the Cubs were talented or sucked, Ernie either actually believed they were going to the the World Series, or did a great job or faking it.

As a ballplayer he had quick and strong wrists – so strong they  were responsible for allowing his skinny frame to produce enough torque to launch 512 baseballs over outfield fences all over the National League.

But the excellence on the field is not what Cubs fans of Banks era (1953-1971) will always remember about Mr. Cub.  It’s his endless love for what he did for living that continues to inform so many who refuse to view their jobs as work.  Instead of playing one game, Ernie always said, “Let’s play two!”

Banks made other ballplayers appear whiny and dour by comparison, and that has always been my professional goal.  Tough days?  Banks must have had plenty as he played through the season after his 40th birthday.  His knees failing, and his gait slowed, Banks continued smiling despite manager Leo Durocher relegating the proud Banks to part-time status in 1971.

Through the 1950s and 1960s when an afternoon at Wrigley Field was made palatable only by Banks’ superb play, ballplayers were unable to capitalize on their value because they were bound to their teams by the reserve clause which allowed teams to maintain rights to a player forever.  Cubs owner Phillip Wrigley made a lot of money because of Banks.  As a token of thanks, Wrigley continued to pay Banks $25,000 per year long past he ceased to function in any capacity for the team.

When the Tribune Company bought the Cubs from Wrigley’s son William, Dallas Green was hired as the team’s general manager.  One of Green’s first acts was to fire Banks because “I couldn’t figure out what he did.”  What he did was bring joy to millions for 19 seasons, and become the face – the hero – of the franchise.  He was Mr. Cub, and Green fired him.

My Dad wrote a scathing letter (one of many he penned to the Cubs) questioning the humanity and business acumen of a man so narrow minded that he would fire a first ballot Hall of Famer who kept the Cubs solvent for years over a measley $25,000.  There was no response.  Logical men without romance in their hearts could never understand, much less run the Cubs.

As a comparison, Jon Lester will “earn” more than 30 years worth of Banks salary every time he takes the mound in 2015.

We take lessons as boys from some unusual people and places, and buying into the possibility the justice will eventually be done and that the Cubs will one day earn that ring that has eluded them for 106 years still grips generations of Cubs fans is due in large part to what appeared to be the naive and childlike poems that have been a part of Cubs spring trainings for what seems like forever.

I became cynical about the Cubs in my 40s, and decided they were hardly worth my attention as idiots ran the franchise into the ground.  What was the point?  That level of excitement is unbecoming a grown man.

What I learned through becoming a cynic was that living a life of ridiculous and baseless optimism is one hell of a lot more fun than steeling myself against yet another round despondence.

Over this past offseason, my anger turned back to a cheer as I peeled the pessimism from my soul like a man strips himself of a suit that just doesn’t fit right.  I figured, what the hell, do I want to grumble through life as a surly frown-emblazoned mope whose reward in life is to claim that he knew better every time reality bit, or as a happy sap who continues to buy in long after most learn the lesson of expecting the worst?

I would rather go down like Ernie – with a smile on my face, and a song in my heart.  Screw reality.  A man could be a lot worse off than dying with hope that tomorrow will be a better day, and until that day comes – a smile will serve as reward enough.

Mr. Cub taught me that.  Thanks, Ernie.