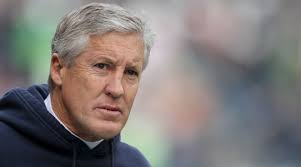 Pete Carroll will never forget the decision he made that cost his Seahawks a championship.

Football used to be a game of pure toughness, where 11 men lined up, hit each other as hard as they could, and won or lost with the results.  Somewhere along the line, coaches decided that getting clever wins games.

Almost a half century ago, Green Bay Packers quarterback Bart Starr jogged to the sidelines after calling a timeout, and told coach Vince Lombardi that he thought offensive lineman Jerry Kramer could get leverage on Dallas Cowboys defensive lineman Jethro Pugh.  That might give Starr the window needed to score the winning touchdown in the famed Ice Bowl.

Lombardi’s response, according to Starr, “Well then run the damn thing and let’s get the hell outta here.”

Seattle Seahawks coach Pete Carroll and his brain trust thought something different with the ball at the New England Patriots one yard line down four points with under :30 left in the season.  They decided clever trumped tough.

Science and toughness molded into a product that compels massive consumption ever Sunday is what fans hoped to see yesterday, but with the game on the line the ratio of those two attributes needed to be assessed and prioritized.  Allowing the players an opportunity to win their matches and thus the game is what a coach owes his players.

With Marshawn Lynch, perhaps the toughest running back in the NFL, in the backfield to quarterback Russell Wilson’s left, the Seahawks threw for the trophy bearing the name of the coach who decided his were tougher than theirs in that Ice Bowl, and Patriots cornerback Malcolm Butler made a play on the ball that ended the game.

Instead of talking about the Seahawks resilience and how the Tom Brady/Bill Belichick era may be better known for their Super Bowl failures than successes, fans and media are yammering about how Belichick may be the best coach ever.

Instead of talking about Brady’s two interceptions, pundits are lauding him as the best quarterback ever.

Instead of Lynch being the first Super Bowl MVP to refuse to comment following a win, Brady is graciously handing out plaudits to current and former teammates into every microphone thrust into proximity of his mouth.

All because Carroll decided clever was more important than tough.

It’s said that in baseball, a great manager might win you four games during the course of a 162-game season, but a bad one can lose you 25.  It’s a little bit different in football.  Coaching in the NFL is crucial in preparation and execution, but at some point a coach needs to look his players in the eye and demand they sacrifice just a little bit more than their opposite number.

It’s called “crunch time” for a reason, and Carroll decided that outthinking provided a clearer path to winning than outhitting.  As a result, the joyous parade hailing a triumph will be held in Boston rather than Seattle.

Carroll had his moment last night – that perfect moment where the science of football could be set aside in favor of the game played by men named Bronco, Bulldog, Night Train, Badnarik, Nitschke, Butkus, Crazylegs, and Robustelli.  But he decided that clever was the answer to the 12th man’s prayers.

That is the beauty of football – the melding of brute force and exact science.  Carroll’s decision to trust his knowledge rather than his men will haunt him forever.  All losses sting for a lifetime, but a loss based upon a lack of trust is a misery even the most arrogant don’t deserve.

Coaches and players earn their results, and last night Carroll earned the ignominy of making a call that valued cleverness over toughness and a loss that will haunt him forever.

One thought on “Pete Carroll no Vince Lombardi as “clever” call to throw loses Super Bowl; will be remembered as worst ever”