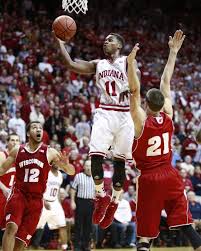 Enjoy Yogi Ferrell’s effort tonight in Madison. Evaluate the direction of the program at the end of March.

Wisconsin just doesn’t lose very often at the Kohl Center, so that should be taken into consideration by Hoosier fans as they look forward to tonight’s visit by the Indiana Hoosiers.

Only 22 times in 225 games has a visiting opponent left that den of iniquity with a win since it opened in 1998.

Playing against the #5 Badgers is hard enough with their experienced and talented roster without home court advantage.  National player of the year candidate Frank Kaminsky is a senior, and so is point guard Josh Gasser.  Somehow Sam Dekker is only a junior despite playing for Wisconsin since what seems like 2004.  Nigel Hayes is a relative youngster as a sophomore, but he’s one of the best players in the Big Ten.

Wisconsin isn’t just experienced and skilled, they are also disciplined and tough.  That’s a combination that sends most opponents home with the closest thing to an acceptable loss there is this side of a game in Rupp Arena.

Bo Ryan’s team has converted 52 more free throws than their opponents have attempted, their rebounding advantage is +6.5, and the average margin of victory is 18.1 points.

I’m not saying the deal is done, and that Tom Crean’s Hoosiers needn’t bother catching the bus from the hotel to the arena, just that fans need to check their expectations as they watch this game.  It would take an exceptional effort from the Hoosiers and an off night for the Badgers for Indiana to stay within 10 points of this very unique team.

Indiana starts two freshmen, two sophomores, and a junior.  There isn’t a single senior on the roster, and no one earning regular minutes is taller than 6’7″.  Tonight’s game is a tough putt, and while that might frustrate fans, it’s a fact.  Accepting it will make nights like this a little less frustrating.

In fact, the key to being a happy Indiana fan these days has more to do with recalibrating expectations than on court excellence, which has been infrequent over the past two seasons..

There have been moments of very good this season, like the three wins against ranked opponents, but the overall level of play by the Hoosiers will make a berth in the NCAA Tournament a great accomplishment.  Success in the tournament is unlikely, but that feeling of pride over earning a spot is where the Indiana program is.

And this is no time to assess credit or blame for the state of the Indiana program.  On a night like tonight, fans should sit, hope, and revel in the effort of teenagers working hard to be the very best they can be.  The amount of sacrifice made by players is grossly underestimated by fans, and it should be appreciated.

After the season ends, an honest reckoning of where Indiana is, and whether it’s acceptable should be engaged.  Is Indiana a top five program as fans, alums, and staff assert?  If so, why have they not finished a season among the Elite Eight since the current freshmen were in kindergarten?

If Indiana fans insist on crowing about Indiana as a blue blood, why was its coach not ranked among the top 50 in the nation by a panel of so-called experts from ESPN?  The list was far from perfect – Bruce Weber (#40) cannot reasonably be assessed as a better coach than Crean, and Josh Pastner (#42) is inching closer to being carried by furious fans from Beale Street to the be dumped in the Mississippi.  Hell, Fran McCaffrey (#33) has never led Iowa to a winning Big Ten record, and his Hawkeyes are 4-4 this season.  The point is the list is imperfect, but not so flawed that Crean could be plunked into the top 20.

Enjoying this Hoosiers team on a night like tonight when winning is an unreasonable expectation for fans to indulge requires some psychological tweaking.  The players and coaches will fight for an unlikely win, and that’s enough for me.

When the season ends, it will be time for a different conversation.  Not about what Indiana Basketball is, but what it should be.  But tonight, it’s about kids working hard to defy steep odds as they enter a very inhospitable arena.