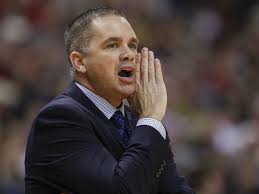 “Psst, we could be pretty good, or the wheels might fall off the cart of these teenagers,” whispers Butler’s Chris Holzmann.

The college basketball season changes in the middle of February.  Teams that appeared unbeatable in January are suddenly flawed, and those that couldn’t win earlier find the right combination of effort, experience, and talent to vanquish foes.

Northwestern couldn’t get over the hump through their first 11 Big Ten games, but then the switch flipped.  They have won three straight since.  Wobbly Indiana travels to Evanston tonight for a potentially huge game against a suddenly competent Wildcats team.

The Hoosiers need a win tonight to guarantee a winning record in the Big Ten, which would almost certainly punch their ticket for a return to the NCAA Tournament.  A loss and the stakes will grow for the last two regular season games at Assembly Hall against Iowa and Michigan State.  Lose those and the first round of the Big Tourney becomes enormous.

A first round bow out after losing its final three in the Big Ten regular season, and Indiana might get bad news come Selection Sunday.  Unlikely, but the possibility heightens the pressure for tonight’s game.  Forgive Indiana fans for fearing the worst after years of disappointing finishes stretching back to 2012 when the Hoosiers  qualified for the tournament for the first time since 2008 and qualified for the Sweet Sixteen.

Butler faces a different challenge tonight as they host Marquette at Hinkle Fieldhouse as it takes aim at its 20th overall win and 10th in the Big East.  The Golden Eagles have won only once in their last 10 games, but two of those games were to overtime, and three others were decided by four or less points.

Matt Carlino leads Marquette in scoring but hasn’t played in a couple of weeks since suffering a concussion.  If he returns tonight, that could pose an additional challenge for the Bulldogs as they figure out how to complete as a whole without its heart – the nationally underappreciated Andrew Chrabascz,.

Add what appeared to be some serious fatigue at Creighton that followed an all-in effort against Villanova, and who knows whether they can hold serve tonight at home?

If the Bulldogs lose, the road to the tournament becomes a little more difficult with games remaining against DePaul at their place, Georgetown at Hinkle, and Providence there.  None of those games is a guaranteed win.  Win out, and the Bulldogs finish second in the Big East.  Lose out, and they likely drop to sixth.  Will the Big East get six into the NCAA?  Probably, but trusting the selection committee to do the right thing by Butler.

This is the magic of the college basketball season.  People might pretend they know what the hell is going on in December, but there is no way to predict what might happen come March.  Good becomes mediocre and bad becomes competent.  Great recedes to the mean, and mediocrity finds a way to shine.  Strong becomes tired, and passive finds motivation.

And it’s all determined by the behavior and work ethic of a bunch of teenagers – or those who are still in the clunky midst of finding their adult selves.

For anyone who has watched Kentucky roll through the first 27 wins of this undefeated season, it’s almost inconceivable they could lose.  They’ve have some close calls, but have always found a way to survive, and those games would appear to make an undefeated run more likely.  All that is true until you realize John Calipari is trying to herd adolescent ‘Cats for whom immature decisions are virtual given.

Tonight will bring yet another chapter of a season for Indiana and Butler that could take a turn toward excellence or malaise at any point, and both games will be fascinating.  The Hoosiers and Bulldogs are capable of virtually anything, as are all teams trying to do their best work after four months of trials and tribulations.

That’s why will watch.