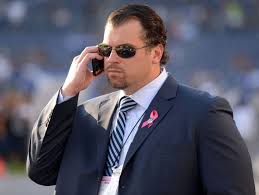 Colts GM Ryan Grigson had what appears to be a very good day yesterday – one that might be instrumental in hanging a banner in 11 months.

Whatever football can be squeezed from running back Frank Gore, outside linebacker Trent Cole, defensive lineman Kendall Langford, and just maybe wide receiver Andre Johnson, the Indianapolis Colts hopes it puts them over the hump in the effort to climb past the New England Patriots for supremacy in the AFC – and NFL.

Gore and Cole will be 32 when the 2015 season starts, Johnson will be 34, and Langford is the young pup of the group – not turning 30 until the middle of January, when the Colts hope to be in the middle of another long playoff run.

The Colts didn’t need to pick up the phone to remain the prohibitive favorites in the AFC South.  Making the playoffs is a given with Houston, Tennessee, and Jacksonville as their division mates, and if the Colts needed another reason for optimism, being scheduled to play the NFC South gives them another assumed four wins.

(By the way, I know assuming anything in the NFL is foolish, but come on, it’s the AFC and NFC South!  That has to be an assumed 10-0 before camp opens in Anderson!)

Sitting still would have been the easy and safe call, but general manager Ryan Grigson is constantly churning the roster to improve bit by bit, and that is exactly what happened yesterday.

Thirty-two year old running backs are historically past or at their career finish line, but Gore has been a model of consistency over his 10-year career.  If he has one more season in him where he can be expected to average four-yards per carry, the Colts are going to present the kind of offensive balance that will make them a headache to prepare against for every defense they face.

Cole has forced three fumbles during each of the past two seasons for the Philadelphia Eagles, and if Robert Mathis can regain his explosiveness after his achilles tear, the pass rush so integral to the success of most Super Bowl champions will be back in Indy.  Cole leaves Philly as the second leading packman in Eagles history – behind the singularly splendid Reggie White.

Langford as a free agent signing will be overlooked by many, but he’s one of those guys who makes plays without possessing great, well, anything.  He’s just good at a lot of things, and capable of making a defense better each week.  With the Rams, he was a pro’s pro, and always ready to contribute.

And don’t forget that Grigson also signed several of his own free agents to deals.  Safety Mike Adams, offensive lineman Joe Reitz, safety Colt Anderson (where else could a guy named Colt go?), and Cam Johnson will be back.

Adams was an especially big signing as the Colts cupboard is virtually bare at safety.  Despite his age – Gore, Cole, and Johnson are contemporaries nearing NFL obsolescence – Adams was better than anyone expected as a late signee who won a starting spot against long odds, and then went to his first Pro Bowl.

The cherry on top of the cake might be Johnson, a certain Pro Football Hall of Famer.  At 34, he might have a couple of solid years left in him.  His production declined in 2014, but three different quarterbacks threw to him during his final season with the Houston Texans, but those 85 catches would be a career year for many.

Johnson would fill the role of veteran security blanket for quarterback Andrew Luck that Reggie Wayne’s departure opened, and he can also serve in a similar capacity to Wayne as a role model for the young receivers who are developing as the core offensive weaponry for the Colts.

This might be the last shopping spree Grigson indulges in for a few years as the rookie contracts of the elite 2012 draft class of Luck, receiver T.Y. Hilton, Dwayne Allen, and Coby Fleener will soon expire and require expensive extensions.

Other good news not out of Indy yesterday was the departure of Darrelle Revis who will rejoin the New York Jets.  When the best gets worse, and the team chasing them improves, fans get excited.

Colts fans should be champing at the bit for a memorable 2015.