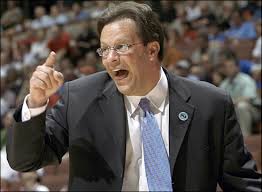 “Ah-ha, I knew half of you bloated southern Indiana hilljacks were out to get me!”

My smart phone was buzzing last night and continues this morning with texts from IU alums and boosters, most of whom are concerned that a win against Northwestern will mean a “stay of execution” for Tom Crean as Indiana’s basketball coach.

Those texts underscore the mood regarding Indiana Basketball among those looking for a reason to believe that next year might be better for the team that tethers them to IU both spiritually and financially.

It’s hard to imagine Crean winning enough to appease the fans who long for the days when Indiana students and alums could proudly boast about winning clean, hanging banners from the south end of Assembly Hall’s ceiling, and being listed among the royalty of college hoops.

The history remains, and Assembly Hall still echoes with the cheers of fans thrilled by basketball excellence.  But the current state of the team has people wondering whether glory will ever return.

Concern is rampant, and those loudly expressing it point to the strange optimism a victory over lowly Northwestern has brought to a portion of the fan base and media that can’t seem to call Indiana exactly what it has become – a middle of the road program in a conference suffering through a down year.

Tonight, Indiana will put it’s skill and tenacity to the test again in Chicago, and the opponent is not from the only Big Ten university to never qualify for an NCAA Tournament.  Maryland is not Northwestern.  A win and they are in.  A loss makes the wait for Sunday’s selection show nerve-wracking.

The division of the Indiana fans into two factions is nothing new.  Bob Knight had vocal detractors and passionate supporters.  The supporters usually won the argument by point to the three NCAA titles and 11 Big Ten Championships he brought to Bloomington, but in the end Knight’s self-absorbed buffoonery, bullying, and 13 year run without a championship gave the haters what they needed to oust him.

I don’t know Crean well, but I admire much of what he has accomplished in Bloomington.  The program’s academic progress rate has been perfect year after year.  Players generally graduate in three years.  Those devoted to playing professionally build their bodies to be as coveted as possible by GMs in the NBA and Europe.  There was a Big Ten Championship that was followed by a second trip to the Sweet Sixteen.  All good stuff.

Crean is also very nice to people who walk past Cook Hall.  He’s given friends of mine personal tours, and seems to enjoy sharing the assets of IU hoops with fans battling illness.  That’s enough for some, and for others that list will bring nausea.  They will see IU under Crean as an endorsement of ongoing mediocrity.

Supporters see great shooting and timely rebounding by undersized players as accomplishments.  Detractors watch the weave offense and soft/confused zone, and shout at the TV.

These are interesting times in Bloomington – and Chicago – and the questions from those who are pro-Crean and anti-Crean far outnumber the answers.

Fans will get one more answer tonight, and then the wait for Sunday begins.

6 thoughts on “Indiana Basketball – So many questions from texters about IU hoops, including “Does winning mean unending purgatory under Crean?””