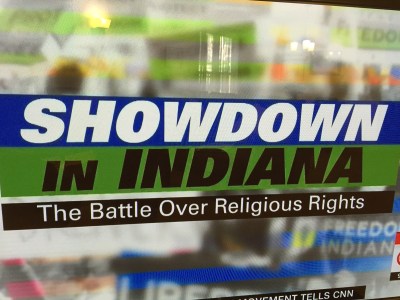 Specials like “Showdown in Indiana – the Battle over Religious Rights” on CNN aired all over national TV last night, and they threaten a hard-earned reputation of Indiana as a welcoming state.

Legislative arrogance + stupidity = irreparable damage to Indiana’s reputation and standing as welcoming host for events like this weekend’s Final Four.

Who in his or her right mind objects to baking a bake or arranging flowers for a gay or lesbian couple excited about getting married?  That’s an extreme example of the effect of Indiana Senate Act 101 that was signed into law by Indiana governor Mike Pence last week, but one that is being cited as the national media scoffs at the lunacy of Hoosiers intent upon being viewed as morons.

A few years ago, I stood at the podium of the Indiana House of Representative with then speaker of the house John Gregg, who turned to me and said, “Look out there.  75% of those people are idiots.”  I laughed.  He corrected me, “I’m serious.  Idiots.”

Can’t argue that today as ESPN, CNN, MSNBC, and a variety of other national networks decry the law that opens the window to allow discrimination of members of the LGBT community.  That window needs to be closed immediately and permanently for many reasons, but the two most important are to correct the perception that Hoosiers are stone cold fools mired in a consciousness straight out of 1952, and to remove a good excuse for conventions and sporting events to pull the plug on Indy as a host city for their lucrative events.

I’ve read the law, and in my understanding it provides protection for individuals and corporations who assert religion as a reason for denying services or goods to a customer.  It doesn’t promote discrimination, but it sure doesn’t prohibit it as the reason for denial to those in the LGBT community.

Not only is passing such a flawed law the result of cockeyed priorities; it’s imbecilic from a pragmatic perspective.  The expected economic impact for this weekend’s Final Four to the Indianapolis area is $70.8 million.  The value of the marketing exposure for the area dwarfs that number.

This city was literally built to host major sporting events, and this legislation puts at tremendous risk all of what city leaders began planning nearly 50 years ago to distinguish Indianapolis from other similar communities.

There is a fix, but it requires to kind of quick action rarely seen in any state legislature.  A law protecting the lesbian, gay, bisexual, and transgender community from the kind of discrimination this law allows must be passed prior to the Final Four.

The law itself is a no-brainer – a fait accompli – because, number one, it’s good policy to ensure that no group is discriminated against for any reason.  It’s always been absurd to view the LGBT community as aberrant or worthy of scorn, but today it is also bad for business, and as the economy of the midwest has evolved away from manufacturing to service and hospitality, exclusionary legislation is bad business.

The NCAA has said they are monitoring the situation, and the NFL doesn’t need much of an excuse to shun a small market like Indianapolis as a potential host for another Super Bowl or the annual host city for the Scouting Combine.  For all of the events related to sports that call Indiana home, there are dozens of lucrative conventions that enjoy the convenience and friendliness Indy provides.

Risking that reputation to take a political stand that compels votes from those who espouse the doltish theory that homosexuality is an abomination is a step toward Indiana returning to its long discarded status as the much maligned birthplace and home to the KKK.

Indiana is better than this – way better than this.  Hoosier hospitality is a well-earned and valuable economic asset for the state, but it is quickly becoming a punchline as legislators have indulged their religious preferences and thirst for votes from those still convinced that homosexuality is a choice, curse, and plague.

Time for Indiana to step up to favor inclusiveness, reason, and economics, and pass a law to protect the LGBT community.

How often does a path show itself to be pragmatic, wise, and decent at the same time?  The legislature has a chance to prove wrong those who believe them to be dunderheads.  Do they have the smarts to embrace it?