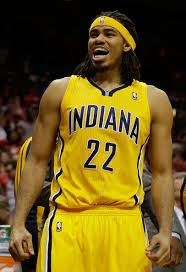 Sharp shooter Chris Copeland felt something sharp this morning that caused a shooting pain in his abdomen.

Pacers forward Chris Copeland is okay, according to reports, after being stabbed a few hours ago while leaving 1 OAK, a club in the Chelsea neighborhood of Manhattan.

That’s the important thing.  Copeland is alright, the victim of a non-life-threatening knife injury to his elbow and abdomen just before the club closed at 4 a.m.

As part of the same incident, Atlanta Hawks players Pero Antić and Thabo Sefolosha were arrested for trying to prevent police from setting up a crime scene.  Should the Pacers find their way into the eighth seed in the Eastern Conference, that will provide a strange but fascinating narrative for a Pacers vs. Hawks first round matchup.

Of all the Pacers, Copeland is probably the last you might guess would cause another man to stab him.  He’s always good-natured and smiling.  That won’t prevent some nut from sticking him, but it’s hard to fathom Copeland as a guy who might initiate street violence.

Copeland’s wife (as reported in the NY Daily News; other media refer to her as a girlfriend or fiancee), Katrine Saltara, was also slashed in the incident, according to the NY Daily News.  She’s going to be okay too.

What’s interesting to me is that 10 years ago, this kind of incident would have caused outrage.  Fans would have thought, “What the hell is going on with these Pacers?  They’re always out late screwing around when they should be focused on the task at hand.”  When you are paid millions to play 82 games of basketball, how hard is it to stay in the hotel and get a good night sleep?

But this is a different group of Pacers, and Copeland was the victim here, not the aggressor.  Copeland wasn’t arrested; he was stabbed.  He didn’t shoot up a parking lot, or appear in public to be a guy who spends his free time looking for trouble.

Staying out until 4 a.m. reflects a lack of understanding of how to avoid short-tempered, well-armed psychos, but blaming Copeland for being stabbed should be left to worried parents, not fans or the media.

Why Antić and Sefolosha felt compelled to throw themselves between the cops and the crime scene is unknown, but it might be a situation that raises the emotional temperature of a playoff series that won’t need much.  The Pacers have eliminated the Hawks from the playoffs the last two seasons, and the two teams don’t like each other very much.  Now there is a knife wound and two arrests to prove it.

Pacers President of Basketball Ops Larry Bird released a statement a few minutes ago, “We are aware that Chris Copeland was injured early this morning in New York City.  We are still gathering information and will update when we know more. Our thoughts are with Chris and those injured.”

Whatever happened and why, the Pacers are not in a position to be distracted by concern for a teammate.  One game behind the Celtics for the eighth seed and two in back of the Nets for the seventh with just five to play, the Pacers are fighting an uphill battle (especially with the Celts holding the tie-breaker advantage).

Tonight’s game against the New York Knicks is a must-win, as are the other four games remaining on their schedule.  Whether Copeland’s wound requires hours, days, or weeks to heal, the Pacers likely need to win their final five games to make a playoff berth.

Our prayers are with Copeland for a quick recovery, the wisdom to stay out of clubs as closing time approaches, and for the Pacers to retain focus as Paul George’s return to the Pacers has put them in position to raise a little hell in the playoffs.