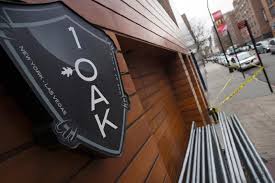 1 Oak was the site of the Chris Copeland stabbing, and the lessons that were learned by Cope, his fiancee, and two rivals.

Copeland’s companion was Katrine Saltara, his former fiancee.  The fracas that ended with Copeland and Saltara suffering knife wounds reportedly began with an argument between those two.  You can probably guess the second life lesson Copeland ignored is once an engagement is broken, any further companionship is unwise.

The hurt of a broken engagement never fully evaporate for most, and that angst combined with late night revelry is going to cause issues.

Thabo Sefolosha and Pero Antić of the Atlanta Hawks were arrested for obstructing a police investigation, and Sefolosha was also charged with resisting arrest and disorderly conduct.  After he allegedly shoved and swung at a cop, it reportedly took six to place him in handcuffs.

In a small town, the police can be reasoned with – a dialogue can be established.  In a city like New York or Chicago, that courtesy can never be expected.  Cops demand, people respond.  When that doesn’t happen, things get rough for the citizenry.

The police have seen enough mayhem to know that control of a situation must be immediately established, and that means unquestioned obedience from the curious throng that gathers around violent crime scenes.

Professional athletes who are very used to getting their own way do not take to being treated with the same indifference as the rabble.  That’s why you often hear reports of athletes saying this to cops, “Don’t you know who I am?  I’m a (team name here).”

Here’s a sidebar lesson for the famous from an old quote by actor Gregory Peck, “If you have to tell them who you are, you’re not.”

For clarity sake – here are the three lessons:

#1 – With every passing minute after midnight, the chances of someone in a bar doing something stupid and dangerous multiply exponentially.  This rule doesn’t imply that you are a threat to public safety after midnight, but that others who overindulge may cause you harm regardless of your disposition.

It’s kind of like driving around at 2 a.m.  Just because one in every two cars at that time is being piloted by an impaired driver doesn’t mean that you are drunk – just that you better keep your head on a swivel because others are.

#2 – When a relationship is ended, the best strategy is to avoid contact with that person forever.  Sure, a residual friendship remains but the hurt caused by the rejection represented by a wedding cancelled will always trump it in the end.

The pain cannot be erased, and should never be assumed to have healed.

The unholy confluence of violating these two rules has Copeland lying in an intensive care unit this morning.

#3 – Regardless of your position in life, or the high esteem with which you hold yourself, listen to the police and obey their commands to the letter.  You might not understand why they want you to do something, but trust they are trying to keep people safe and respond likewise.  Or if you can’t work up the requisite amount of respect to march to their instructions without question, understand they will arrest you if you don’t.

Copeland, Saltara, Sefolosha, and Antić learned their lessons the hard way.  You don’t have to.