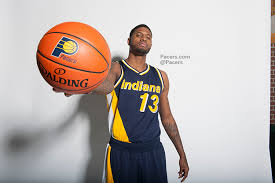 The Indiana Pacers are undefeated in the alternative Flo-Jo jerseys, and also with PG-13 in the lineup. Will both be enough for the Pacers to earn a spot in the postseason tournament?

I’m all in – not only for the Indiana Pacers to earn a spot in the NBA Playoff, but to raise hell once they get there.

With seven games left, it was assumed by most that the Indiana Pacers would need to sweep those games in order to secure a spot in the NBA Playoffs.

Five games into that seven game run, the Pacers have swept all five and are now tied with the Brooklyn Nets for the eighth and final spot in the Eastern Conference.

If all three teams finish the season with the same record, the tie will be broken by a look at the results of the games the three teams played against the other two.  Boston leads at 6-2.  Brooklyn is 5-2.  The Pacers are 2-5.

So, the Pacers have put themselves in a position where they almost certainly must sweep the last two games of the regular season against the Washington Wizards at home Tuesday, and in Memphis for Wednesday’s regular season finale.

Brooklyn closes its season at home tonight against the Bulls and Wednesday against the woeful Orlando Magic.  Boston hosts Toronto tomorrow and travels to Milwaukee Wednesday.

One of the few pieces of good news is that Toronto and Chicago are both tied, and thus are playing for something.  Milwaukee has locked up the #6 seed in the East, and will have exactly nothing at stake Wednesday night against the Celtics.

Orlando will only be playing for pride Wednesday night in Brooklyn.

As for the Pacers opponents, the Wizards are two games behind the Bulls and Raptors.  Due to vagaries of the NBA tiebreaker policy, the Wizards cannot catch the Raptors, but could get to Chicago if they win out and the Bulls lose their last two.  That would allow the Wizards to swap spots with the Bulls in the 4th seed, which would provide them home court advantage in a first round series against the Bulls.

That means the Pacers will likely get the Wizards’ best shot tomorrow and the Bulls will do what they can to post a win against the Nets.

Math makes my brain hurt, so calculating the exact probabilities of the teams that will occupy the bottom rungs of the Eastern Conference playoff teams is not forthcoming – especially when we will know for certain what will happen in roughly 60 hours.

One thing for sure is the Pacers could be a beast of an opponent for the Atlanta Hawks in the first round, if the they can get there.  Paul Milsap hasn’t played since April 4th because of a dinged shoulder, and Thabo Sefolosha is out for the season with a broken fibula.

While Milsap is expected to be ready for the playoffs, the Pacers are as healthy as they have been all season.  Paul George is still on a pitch count (15 minutes maximum), but the longer the Pacers stick around, the better George is likely to respond to extended minutes.

The Pacers have eliminated the Hawks from the postseason during both of the last two seasons, and with a nearly healthy George could arguably be seen as a better team as either of the teams that sent Atlanta into their long dirt nap.

C.J. Miles and Rodney Stuckey have been stellar when healthy this season as free agent acquisitions, and Solomon Hill has improved bit by bit throughout the season.

The toughest part for the Pacers to succeed in the playoff may just be getting there, and if they do, the question may become whether they will wear the FloJo jerseys – in which the Pacers are undefeated this season.