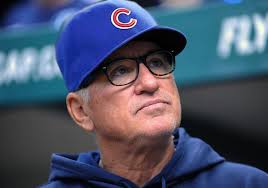 Cubs manager Joe Maddon is always looking for an advantage – even minute ones.

Fourteen games in the 2015 Chicago Cubs season, I am convinced Joe Maddon is exactly the right guy to lead them on last leg of a trek from a desert of misery and mediocrity that began in 1908 to a championship – a journey that makes Moses’ trek to the promised land look like a cake walk.

Last night, Maddon did something I’ve never seen before.  It was a move that makes sense in a very specific scenario, so you would have to watch a lot of baseball to see another moment exactly like it pop up, but it was emblematic of the kind of energy and leadership Maddon brings to every moment of every game.

With two outs in the top of the ninth inning in Pittsburgh, the Cubs were behind 4-3 with Anthony Rizzo representing their last hope.  Rizzo singles, and rookie phenom Kris Bryant comes to the plate.  Rizzo isn’t exactly fleet of foot, so maybe aggressive fans thought a pinch runner might be in order.

Maddon had liberally used his bench to try to create advantages throughout the game, plus center fielder Dexter Fowler had been removed due to injury, so the most likely candidate to run for Rizzo was pitcher Travis Wood.

If Wood had been inserted, he likely would have been used in left field in the bottom of the ninth with Bryant sliding over to first, and left fielder Chris Denorfia moving to center to replace Bryant – who had earlier moved there from third base.  That’s not an ideal defensive lineup, but better to be playing defense in the bottom of the ninth than getting dressed after a loss.

Madden left Rizzo on first until Bryant worked a full count, at which point the runner on first would be able to leave with the pitch because there can be no consequence at that point for going.  With a full count, the advantage slid slightly toward the Cubs if Wood was inserted as a pinch runner because he would be able to score on an extra base hit, and so at that point Maddon did it.

The result was a Bryant strike out and a Cubs loss, but the message sent by Maddon is that every advantage will exploited.  When a leader is always searching for a way to help his team scratch and claw for an extra couple of percent chance to succeed, the effect is that the players will do exactly the same thing.

Instead of playing baseball as a game where men hit, throw, catch, and run, the Cubs are becoming a team that thinks their way through a game from pitch to pitch.  That is the most profound evolution for the Cubs caused by Maddon joining the franchise.

Over the course of a season, a manager might win four games with his brain, but a team with baseball players who are shown how to think their way around the diamond can win a championship.

The Cubs, for all their physical warts over the past four seasons, have been an even worse team mentally.  Madden has changed that through his own fearless intellect.  Gaining a one percent advantage will only pay off once every 100 events, but being smart can be contagious and over the course of a 162-game season can mean the difference between going to the playoffs and enjoying some down time in October.

Managers in baseball and business owe their staff every chance to succeed, and Maddon is operating at a level for the Cubs that allow them the highest probability for prosperity.

Maddon is a change agent who showed an ability to pay rapt attention last night to a ballgame from pitch to pitch and a willingness to adjust his staff in a way that communicates a culture where scratching and clawing for wins is contagious and will flourish.

If you manage a department, watch the Cubs and learn from a guy who shows the difference between those who wait for success and those who make success.