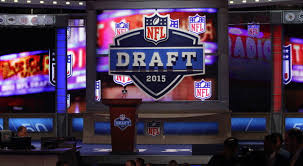 Tomorrow night, 32 dreams will come true in Chicago, and hundreds will be crushed. That’s drama.

I don’t spend my life studying film on hundreds of college football players, so this is not the spot to learn about the lateral quickness of Landon Collins or pad level of Malcom Brown, but there are reasonable assumptions that can be made about the NFL Draft that can inform selections.

A draft board I would put together would be expressly constructed to address the quality of the player, not the need I might have on my roster.  Now and again, a glaring roster gap intersects with the right positional player to make a selection a simple call.  Peyton Manning and Andrew Luck for the Colts are two great examples.

This mock draft is the board I would assemble regardless of what I think the team making the selection will do.  I would not take James Winston #1, so despite everyone believing that Tampa will do exactly that, my pick will reflect what I would do.

Tampa – Like I said, I think James Winston is going to be an ordinary to good QB, so I’m going to try to pick the player who can do the most for the longest period for my franchise.  That’s Leonard Williams, defensive tackle from USC.  He’s a beast.

Tennessee – If I’m Tennessee, I deal this pick south to someone who covets either Winston or Marcus Mariota.  I love trading down because it exploits the emotional and covetous nature of GMs and coaches.  More guys gives my team a better chance to gather quality players.  The draft is a numbers game.  More players – more good players.

Jacksonville – The Jags are still paying for the poor appraisal and selection of Justin Blackmon in the 2012 draft, and Amari Cooper brings all of the talent and none of the baggage (we assume of Blackmon).  The Jags need a target for Blake Bortles, and Cooper is the best receiver in the draft.

Oakland – Toward the end of iconic owner Al Davis’ life, it was a given that the Raiders would produce a head scratcher.  We’ll see over time whether the ability to pull the trigger on nutty picks is genetic.  If I’m the Raiders, I take Vic Beasley, OLB of Clemson.  He’s explosive, and can get to the quarterback.

Washington – Owner Dan Snyder is a younger version of Davis, and is a great target for trades.  If they are amenable to moving up, and I hold a pick they want, the trigger would be pulled.  The Redskins have a lot of needs on both sides of the ball, and I like the versatility of Dante Fowler of Florida.  He’s listed as an OLB, but can slide all over.

NY Jets – If I’m the Jets, I think very seriously about drafting James Winston from Florida State.  Throwing him into the media fishbowl of the Big Apple might be asinine, but short of moving the team, I can’t fix that.  The Jets need a quarterback.

Chicago – Aye, yi, yi.  The Bears need skill players almost everywhere, and are unlikely to regain competence as a team in the short term.  Given that, I grab the best offensive lineman available – and that appears to be Brandon Scherff from Iowa, who may project better on the interior of the line, rather than tackle, but that’s fine.

NY Giants – The Giants defense has eroded through attrition over the last few years, and they need to find another anchor for the middle.  Danny Shelton – DT from Washington is the kind of immovable object in the middle that can make everyone else a little bit better.

St. Louis – All the smart guys point to the Rams taking either an offensive tackle or wide receiver.  How many times has this franchise blown early round picks on those positions?  Plenty.  That’s why I’m going elsewhere.  I think the Rams go running back with Todd Gurley.  Sure Tre Mason and Zac Stacy are already there, but this is an explosive back that can score.  If Gurley’s knee bothers Jeff Fisher and Les Snead, take Melvin Gordon, a big back who should wind up being a winning version of Stephen Jackson.

Minnesota – Like most of the teams in the top half of the draft, needs are many.  Good cornerbacks tend to be rare, so taking one with the 11th pick seems prudent for a team in need of an upgrade.  Trae Waynes was outstanding at Michigan State, so He’ll be my guy.

Cleveland – If the Browns aren’t the team that trades up into the #2 spot to select its third 1st round QB in four years, they need a replacement for Josh Gordon at wideout, and this is a very good WR draft.  DeVante Parker of Louisville is big, long, and fast enough.

New Orleans – Not sure DE Alvin Dupree from Kentucky is ready to impact the Saints pass rush immediately, but in time he’s capable of being a game wrecker.

Miami – I sure am spending a lot of time talking about needs for someone who extolls the virtue of plugging holes, but with the suspension of Dion Jordan, they may be motivated to go after a guy who can knock QBs down.  They showed a couple of years ago they weren’t shy about taking a chance on a red flag guy, so let’s guess they didn’t learn from Jordan’s travails and will take Randy Gregory of Hamilton Southeastern High School and Nebraska – after leaving Purdue.

San Francisco – One of the best franchises has devolved into chaos.  They need a running back after Frank Gore left for Indy, so the Niners take Melvin Gordon.

Houston – The Texans need to build a defense that can stop Andrew Luck and the Colts, so I think they go cornerback with Kevin Johnson of Wake Forest.  He has nice size and okay speed.  Aggressive, but I would rather have to pull a guy back than urge him to attack the ball.  This is a nice draft for receivers, but I think they will wait until the second round to grab one.

San Diego – I don’t like Philip Rivers and the Chargers, and find their draft needs irrelevant.

Kansas City – The Chiefs take OT Andrus Peat because he is the best player available, and truth be told, he’s likely to be gone at this point if NFL GMs are thinking clearly.

Cleveland (from Buffalo) – The Browns should trade down with this pick because their needs are too many to be addressed with first rounders.

Philadelphia – The Eagles are still a decent bet to move up to the #2 pick to grab Mariota.

Cincinnati – If you have noticed my mind wandering at this point, you have a keen eye for appraising my writing.  I think OT Ereck Flowers of Miami is the best on the board, and keeping Andy Dalton upright long enough to get the ball to A.J. Green seems a righteous goal.

Pittsburgh – Too easy to make this about the Steelers need to replace Troy Palamalu not to have them take Landon Collins of Bama.

Detroit – With Suh gone, the Lions need someone to pressure the QB, and DE Shane Ray is the best pass rusher in the draft despite his getting popped for weed 48 hours ago.

Arizona – Larry Fitzgerald is getting long in the tooth, so let’s have the Cardinals pick up Breshad Perriman from Central Florida.  His 40 time was a truly sick 4.26 and his frame is long and tall.  Might have the best chance to be an elite WR among a very good stock of WRs.  He needs work on the finer points of being a receiver, but who better to learn from than Uncle Larry.

Carolina – Cam Newton needs to get hit much less or his career will quickly erode.  Go OT with Jake Fisher of Oregon. By the way, how many OTs in the last five drafts have been named Jake or Fisher?  Seems like half.

Baltimore – The city is burning, so maybe the Ravens should draft a fireman.  If they focus on football, I like them getting greedy at WR with Phillip Dorsett.  Small but fast.  The Ravens will NOT draft Dorial Green-Beckham as he would be exactly the kind of screwball they are trying to distance themselves from.

Dallas – I like them to take a CB instead of a running back because I could run for 1,200 yards behind that line.  No need to blow an early pick on a running back.  Take either Marcus Peters of Washington or Byron Jones of UConn.

Denver – Some like DE Arik Amsted going to the Broncos.  I do not. Despite his upside, he’s too upright and slow.  Denver needs to win now with 39 year old Peyton Manning nearing the end of his Hall of Fame career.  CB Eric Rowe played at Utah, so the altitude won’t bug him.  At this point, the picks are so scattershot, I have no idea what the Broncos will do.

Colts – I love DT Malcom Brown of Texas here.  The Colts need a man in the middle of that 3-4, and he plays a lot like Arthur Jones.  For a team with needs that can be addressed with later selections in the draft, a beast in the middle to provide depth would be prescient.  If either Gurley or Gordon slips to this pick, grab him.

Packers – OLB Eli Harold from Virginia just looks like a Packer to me.  I know he’s projected lower, but there is a lot of upside with Harlod.

Saints (from Seattle) – Trade down.  Lots of work to be done in rebuilding.  Getting more later makes more sense than investing here.

New England – Bill Belichick is going to take a guy that the first 31 teams selecting in the NFL Draft passed on, and at least half will be outsmarted by the usually right Belichick.  I am smart enough to know that I do not know who that is.