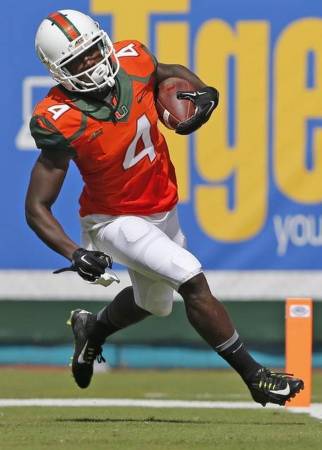 Phillip Dorsett takes the top off defenses with unique speed. He makes the Colts harder to defend, but the Colts need to protect Andrew Luck so he can deliver the ball to Dorsett.

When Indianapolis Colts general manager Ryan Grigson told the media last week that he would draft the best player available with the 29th pick, everyone assumed he meant the best player on the defensive side of the ball.

Nope and nope.  Grigson and the Colts brain trust decided to take Phillip Dorsett, wide receiver from Miami who is very similar in almost every way to T.Y. Hilton.  I love Hilton, but the Colts already have one of him.

One thing that we absolutely know about Grigson is that being second guessed is not a concern of his.  Since drafting quarterback Andrew Luck, Grigson he blown past the obvious to embrace the unique.  There is nothing wrong with that at all.  If Grigson went chalk with every pick, he would be exactly as good a GM as the so-called experts in the media, and the Colts would finish 4-12 every season.

There are two pretty simple ways to win football games, score touchdowns and cause turnovers, so finding a guy at 29 like Dorsett who averaged better than 24 yards per catch for Miami last season and runs a sub 4.3 40 is a pretty solid weapon for scoring touchdowns.  Grigson also said last night that Dorsett will likely be a dynamic punt returner.

That’s the good.  The bad is that the Colts defense still needs an elite pass rusher (unless Robert Mathis comes back full speed from his torn achilles), at least one safety, and a run stuffing tackle.  I’m fine with Grigson passing on Collins because safeties and the first round just don’t go together in my schematic, but Brown sure looks like a guy who can be a playmaker in the middle of a defensive line.

Maybe the offensive line is going to be okay in 2015 as is, but without knowing whether right tackle Gosder Cherilous is healthy enough to return to near elite status at right tackle, Andrew Luck is in an uncomfortable amount of peril.  Without Luck, Dorsett – and the rest of the receivers – are useless.

What makes passing on Brown even worse is that Bill Belichick was lurking in the weeds at 32 to take him when the first 31 teams in the first round chose someone else.  With Vince Wilfork gone, the Patriots needs an immovable object in the middle of its defensive line, and that means that the Colts are likely to see Brown again and again as they try to advance past the Pats to Super Bowls for the rest of this decade.

Grading a draft while it’s still ongoing is a ridiculous exercise.  We know one pick – one new Colt.  There are going to be eight more, and before we know who they are going to be, Grigson gets a pass.  Hell, it’s impossible to grade a draft before a couple of seasons pass where the development and productivity of players can be assessed.

Right now, we are guessing without having a full raft of data to process, but one pick in, it appears the Colts are deeper at wide receiver, but not necessarily better unless Dorsett can play Hilton, Andre Johnson, or Donte Moncrief onto to the bench.  Interesting though to imagine defenses trying to figure out how to take away Hilton, Johnson, and Dorsett with Luck delivering the ball.

Today’s less heralded selections will be equally important to the future of the Colts, and if Grigson can find a couple of diamonds in the rough tomorrow, this could still be a draft that puts the Colts over the top.

I can’t help but think the Colts will look at Malcom Brown across the line of scrimmage and wish he had a horseshoe on his helmet.  But maybe Belichick will wind up watching Dorsett run past him to score touchdowns that send his Patriots home in January.