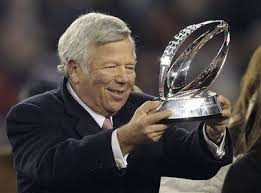 Patriots owner Robert Kraft is showing the Patriots guilt by negotiating for a reduction in penalty. If innocent, demand exoneration.

Reports on ESPN.com suggest that the NFL and New England Patriots are involved in back channel discussions to resolve issues with Deflategate penalties.  If Roger Goodell has any authority at all over the NFL, the solution is easy for the Patriots – take your medicine or pack a lunch.

Either the NFL means business when it comes down on scofflaw franchises, or it doesn’t.  If squawking by a team can always result in a reduction in penalties, no franchise will ever show the commissioner’s office any respect.

If there is not a meaningful consequence for cheating, all 32 teams trying to win a championship are going to take the negligible risk to build every advantage possible.  That’s the way professional sports franchises are wired.  Winning is everything.  Losing is a ticket to unemployment or a career in the media.

Without serious disincentives, the lines between legal and illegal get blurred, and renegade operations thrive.  If the NFL wants to tiptoe toward professional wrestling where drama is scripted, allowing cheating to go unchecked is a good first step.

NFL owners begin their spring meetings today, and behind closed doors there will be discussions regarding the penalties against the Patriots assessed by the NFL.  Two draft picks, a $1-million fine, and a four-game suspension of quarterback Tom Brady (already appealed by Brady) were decried by Patriots owner Robert Kraft after he earlier said he would accept the findings of the Wells Reports and the penalties that might accompany them.

His fellow owners will either see the penalties as a well-earned punishment, or a scud that can easily be lobbed at them if they step across a gray and blurry line.

Funny what happens in the minds of billionaire owners when presented with bad news – platitudes turn into indictments, and friendships like that previous enjoyed by NFL commissioner Roger Goodell and Kraft become adversarial.

The only people who believe that Brady and the Patriots don’t engage in activity inside and outside the rules to gain a competitive advantage are Patriots fans blinded by their own allegiance.  Their insistence on attacking fans of other teams because of what they perceive as envy is a bizarre deflection that reveals their disproportionate and troubling self-importance.

Admitting they lowered the pressure of the balls prior to the AFC Championship Game – as well as other games dating back to the 2007 season when NFL teams were allowed to prepare offensive balls to their own specifications – would show a conscience, rare in pro sports or business.  Goodell refusing to undercut Troy Vincent, the NFL’s executive vice president of football operations, would show uncommon balls.

An admission through a reduction in penalty that the league overreacted to a pile of circumstantial evidence would be vindication for a franchise that has shown a pattern of wanton misbehavior.  It would exonerate an owner whose nauseating mentions of trust for employees reek either of an childlike and goofy trust or disingenuous claptrap.

Only the most moronic billionaire trusts his employees – or wife for that matter.

Kraft trusted Aaron Hernandez, who has been convicted of murder.  Yesterday, he was quoted on mmqb.com, “I’ve known Tommy (Brady) 16 years, almost half his life.  He’s a man, and he’s always been honest with me, and I trust him. I believed what he told me. He has never lied to me, and I have found no hard or conclusive evidence to the contrary.”

Good grief.  I don’t know whether to loathe Kraft for advancing that putrid inanity, or pity him because he actually believes it.

If the NFL ever wants a team against whom it levies a tariff to accept it with grace, all back-channel conversation will immediately cease, and Goodell will stand firm against a man he once foolishly saw as a friend.

The integrity of the NFL as a member organization comprised of 32 owners who treat it with respect and deference is at stake.

Kraft runs an organization that does what it takes to collect Lombardi Trophies.  Goodall should be a strong enough leader to ensure that the Patriots know they can be held accountable.