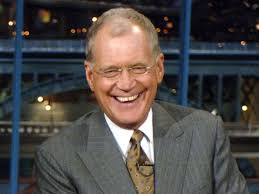 David Letterman never appeared bored while hosting, and that is his greatest lesson for radio hosts.

Tonight, Indianapolis native David Letterman will host his final show before settling easily into a well-earned retirement, but his legacy will linger in the behavior of radio hosts everywhere.

Dave (it seems odd to call him “Letterman”; he’s just “Dave”) did it right, and he did it the best.

He wasn’t the first to employ many of the tactics he used to amuse himself and others, but he was the most consistent and the best.

For 35 years, including the strange and wonderful daytime show he hosted on NBC in 1980, Dave was absolutely himself.  He’s as easily bored as a fifth grader in math class, and passed his time find ways to engage his wit and curiosity.

Doing something – doing anything – is far superior to sitting like Perd Hapley from “Parks and Recreation” or the real life Joe Franklin, whose pedantic and monotonous late night talk show on WOR-TV in New York celebrated tedium.  Dave has never taken his need to be engaged and entertained for granted, and it was our good fortune to go along for the ride.

His shows evolved from the insane and chaotic daytime show to the slightly more controlled Late Night era to the last 22 years on CBS that became less edgy, but still featured the wit and raw honesty which will always distinguish Dave from the others who have tried and failed – or those who succeeded as a late night companion.

The list of ways talk radio hosts can improve by emulating Dave could stretch into a book, but let’s keep it short so you don’t get bored:

Doing Something always beats saying something – Strange for a talk show to embrace doing, but Dave did things that kept the show unpredictable.  It seems odd now, but watching his joy at dropping stuff like watermelons and TVs from a tower just to watch them explode, or crush stuff with a steamroller was always a great treat and offered a change of rhythm.  Having the video of the show rotate 360 degrees during the hour of the show might have been a bit over the edge, but better to make a mistake by commission than to do nothing.

Be authentic – Dave is Dave.  I can’t think of a single moment in 35 years that I thought Dave was acting or indulging in performance as anyone other than purely who he is.  That’s evolved over the years, but David Letterman is not a persona.  He’s who he is.  Always honest, even when it seemed slightly cruel while being incredibly funny.  The flaws made Dave real.

Nothing wrong with speaking your mind outside the precise routine of the show – Dave has occasionally spoken his mind about world issues beyond monologue material in a way that Johnny Carson never did, and there is nothing wrong with that.  The risk is that viewers/listeners might be turned off, but the good that can come of it is that others are engaged positively.

Bored is bad – If a host is bored, consumers are going to be bored.  Dave rarely allowed himself to dwell in the squalor of performance boredom.  Making the needles bounce isn’t the job – it’s to keep yourself engaged and trust that because of that effort, others will be engaged.

Dave is purely Dave – funny, honest, raw, loyal, and generous – all the traits we want in a friend, and that is what a talk radio host is – a companion to keep us company at times when none is available.  He is the best of what being a Hoosier is, but with a Groucho Marx quick and occasionally mean wit that keeps us just uncomfortable enough to feel like we might miss something if we don’t watch.

Dave is the latest in the continuum of Jack Paar, Steve Allen, Johnny Carson to call it quits.  Jimmy Kimmel and Jimmy Fallon are the next generation, and there will be more.

But for talk radio hosts, Dave has shown the way.