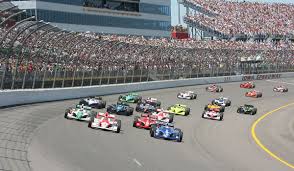 If you have never seen the start of the Indianapolis 500 live, you have missed the most thrilling moment in our culture.

For people under the age of 40 – if an event is not on live TV, it doesn’t exist.

That’s a lot of people for whom the Indianapolis 500 is a vaporous idea that exists only in the imagination because it’s the victim of a self-imposed local live TV blackout.

Live TV is the gateway drug to live gate, and without it, the average fan at the Indianapolis Motor Speedway on the the Sunday before Memorial Day will continue to age by one year each and every Indy 500 until current fans are all dead.

No one in American sports – no single event – exercises a local blackout.  NFL teams, until the local blackout rule was recently scrubbed, would actually buy and distribute their own tickets to ensure every game aired locally.  That’s how important live TV is as a marketing arm of an NFL franchise.

During that bleak 13 season decline, average attendance for the Blackhawks fell from 20,832 to 12,727.  Wirtz died of cancer before the 2007-2008 season and one of the first orders of business for the Wirtz Family was to unleash the marketing hounds of live TV.  As soon as young Hawks fans saw how cool the games were in person, attendance exploded.

In the first year home games were televised with the best National Anthem in sports, live gate popped from 12,727 to 16,814.  The second year, it bumped to an NHL best 22,247.  It didn’t hurt that the Hawks improved, but without live TV, no one would have known what they were missing.

Wirtz felt allowing people to watch on TV for free instead of pay to come to the United Center was bad business.  Who and what does that remind you of?  He was as wrong as the powers at the Indianapolis Motor Speedway in engaging in the 1960s thinking that giving away milk means no one is going to want to buy cows.

In truth, giving people milk enhances the demand for milk – and thus cows.

As a more similar corollary, how about the Kentucky Derby, another iconic single-day sporting event that has long defined the community in which it is held.  It’s on local TV in Louisville, and extensions and decks are added to Churchill Downs almost every year.  The infield is filled, and the Derby has never been bigger.

If people don’t attend the Derby, they have neighborhood parties where kids and families watch together.

So what the hell is stopping someone at a conference table at the Indianapolis Motor Speedway from standing, pounding the table, and screaming, “What the hell is the matter with you people?!  What is this, 1958?  This crazy anachronistic blackout is killing us!!!”  Is it any wonder why I’m not invited to many meetings?

The start of the Indianapolis 500 is the most thrilling thing I have ever seen.  Forget most incredible sporting event – it’s the craziest most unique moment our culture is created.  Thirty-three cars painted bright cherry red, kelly green, dandelion yellow, and ocean blue screaming three-wide into turn one at 225 miles per hour is so insane, it’s difficult to process.

Add the miles long grandstand that borders the front straight that holds nearly 200,000 people, the fly over, the singing, the parade, the pageantry, and it’s a human tragedy that more people in central Indiana aren’t even aware of what this thing looks like because they aren’t interested in watching the beginning of a race on TV four hours after it ended.

The long and slow fade of the Indy 500 both nationally and locally is a mind-numbing disappointment.  The answer to what needs to happen to engage a national audience is a little more complicated, but the first step to get local people – especially those under 40 – to embrace the magnificent phenomenon as a must-see bucket list event every year is to let them get a taste of it in their homes.