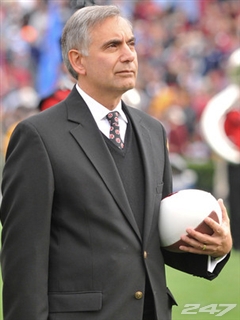 College sports is the only business in America where no one in power sounds smart no matter how smart they are.

You have to be a pretty darn smart guy or woman to be the president of a university – even one in South Carolina – but when University of South Carolina president Harris Pastides shared his thoughts on the O’Bannon lawsuit with CBS Sports Jon Solomon, he went from being really smart to ridiculous in one misguided sentence.

Pastides is also the NCAA Division One Board chairmen, so when he talks, there is more behind his words than the ranting of a pedantic academic fascinated only controlling his own minor league fiefdom.

Most of what Pastides said regarding the idea that athletes deserve some measure of compensation beyond the pass through expense of a scholarship sounded downright progressive compared to many of his peers, but all that reasonable rhetoric went out the window late in the conversation.

On whether the NCAA should appeal the decision in the O’Bannon suit to the U.S. Supreme Court if the 9th US Circuit Court of Appeals rejects its current litigation – “My hope would be that we’d get beyond this. You ask me if I’d like to see it appealed to the Supreme Court. I’m one member of the board. I’m eager to see us turn the page on that and start working within whatever framework we have to start working in.”

My hope that logic and reason were getting a foothold in the debate swung optimistically when reading that.

Pastides spoke to Solomon at the SEC Annual Meetings in Destin, Florida, where it was announced that conference schools would each receive a record $31.2 million from conference revenues derived largely from football and Men’s Basketball media deals.

He started to worry me with this quote about the state of relations with the student-athletes, “I know where money is involved it’s a contentious thing. But the NCAA can’t be seen as anti-player or anti-former player. We don’t want that.”

That sentence defines the battle as one of branding.  It’s about what is seen, rather than what is.

It’s one thing to worry about image, and another entirely to worry about failing to act with regard to the principles of logic and business – the primary fundamental being that value is what generates worth – and thus payment.  This is the primary cause of the disconnect between athletes and institutions (universities, conferences, and the NCAA itself) that purport to represent them.  There are a lot of guys in expensive suits suckling vigorously at the teat of big money college athletics while the athletes providing the product are blocked from the spigot.

The battle for college administrators is one of branding.  They need to allow the envelope to be pushed far enough by the athletes that they and the public don’t see coaches and administrators as pimps or plantation owners employing cheap labor to feather their own luxuriously appointed nests.

Here is where Pastides lost me entirely, “We also at the NCAA care deeply about the players whose names aren’t on the jersey being bought. I’m one of those people who was strongly in favor of cost of attendance sharing more money with the players to help college become more affordable. … What I’m equally vehement in opposition is that we allow a small number of elite athletes to benefit egregiously because of their talent financially while they’re still college students.”

That means paying people to the level of their value is in Pastides mind an “egregious” misallocation of the wealth those athletes generate.  He is saying that paying men’s golfers or track athletes a full cost of attendance stipend is the fiscal responsibility of the students whose names on the backs of jerseys generate a great deal of an athletic department’s wealth.

Compensating athletes for the “egregious” level of wealth they provide coaches, administrators, and those who do business with universities is slow in coming, but the evolution of public rhetoric from a bureaucrat like Pastides shows a reasonability that was completely absent from these conversations a decade ago.

Value finds money – it is today in the form of under the table payments from boosters and agents to athletes at some schools – and it’s a welcome change for those sharing in the largesse to finally admit something needs to be done without the petulance represented by an appeal to the Supreme Court.

Bigger than the O’Bannon case will be the lawsuit being brought by Jeffrey Kessler that will change the whole construct anyway.  In the mean time, we can quietly applaud men like Pastides beginning to admit there is a hole in the economic morality (if there is such a thing) of college sports that can be quickly patched.

(Jon Solomon will appear on the Kent Sterling Show this afternoon on CBS Sports 1430 in Indianapolis to talk about his interview with Pastides.)