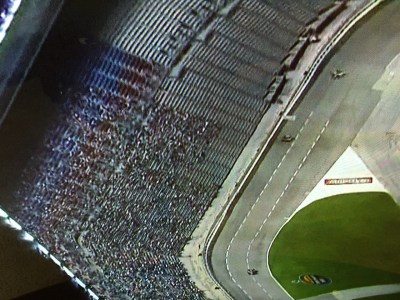 The crowd at Texas was either solid or lackluster depending upon your perspective. For IndyCar, each empty seat should represent a failure to engage.

Therein lies the rub in IndyCar – there is no rub, no conflict.  As a result, there is no drama.

If I’m rooting exactly as hard for the driver in first place as the driver in second place, why would I care who wins?  In old westerns, there were cowboys in white hats and others in black hats.  They fought, and moviegoers rooted.  In crime dramas, there are cops and robbers.  In the NFL, there are Bill Belichick and the New England Patriots and the other 31 teams.

How much more fun was Big Ten college basketball when Bob Knight was at Indiana?  IU fans loved the General, and the fans of every other school hated him.

Tennis was rolling when John McEnroe and Jimmy Connors played because they were polarizing.  Yes, there was a time when men’s tennis was relevant in America, and the two biggest American stars were unafraid to be hated and loved in equal measure.

Howard Cosell made a sporting event relevant through his presence.  He was simultaneously the best loved and most hated sports broadcaster in America in the 1970s and 1980s.  Rush Limbaugh has had a similar effect on radio listeners the last 25 years.  Polarizing equals popular.

Competition should bring drama, but in IndyCar there are no bad guys, so as a result there is no drama.  Without drama, the series languishes on the NBC Sports Network.  No offense to NBCSN, but if it isn’t on ABC, CBS, Fox, NBC, or ESPN, an event simply does not exist in the minds of viewers.

Every time IndyCar threatens to make a little news through controversy among drivers, the league itself comes in and issues fines.  It’s as though those governing the series want to dampen enthusiasm rather than encourage passion.

Drivers express anger, and they are required to write a check.  It’s crazy.

Back in the day, the drama of open wheel racing came from record speeds, but those days are over.  Physics wins in life, and speeds in excess of 230 miles per hour puts lives in danger at a level that makes everyone involved uncomfortable.  The cars are not built to withstand contact – unlike NASCAR – so rubbin’ ain’t racin’ in IndyCar because it’s expensive.  What’s left to fuel drama is acrimony among drivers and the rivalries that result.

I’m not advocating a full out scripted reality series like WWE, but the very least IndyCar can do is to absolve those who express agitation toward their peers.  Let public discourse flow without fines.  If Will Power hates Helio, encourage him to voice his displeasure.  If Sage Karem feels Ryan Briscoe blocked his pass attempt, he should feel free to express his distress.  If Tony Kanaan is offended by Marco Andretti’s tactics, turn that Brazilian temper loose!

The crowd – and I use that term loosely – at the Texas Motor Speedway Saturday night enjoyed watching cars drive in circles at 210 mph, but without easily recognizable points of differentiation between the drivers and teams, there is no context to build a rooting interest.

I’ve interviewed and like almost all the drivers in IndyCar.  In fact, I like them all equally.  They are really nice and accommodating – wonderful guys.  I watched the race, but had no interest in who won because among five guys I like a lot, what would make me care that one beat the others?

With horse racing, parimutuel wagering infuses very personal emotional investment.  In the NFL, wagering and fantasy football prompts passion.  In IndyCar, without money on the line or a meaningful fantasy platform, what’s left are the personalities of the drivers.  With all being nice guys who love one another, what’s left to motivate interest?

That question is at the root of national apathy toward the IndyCar product.