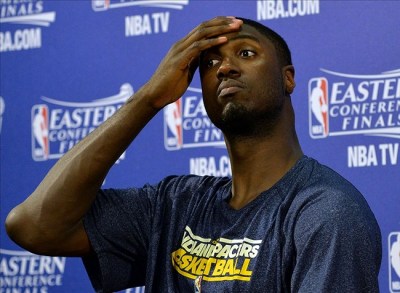 Roy Hibbert is a good guy who might have been happier in a cubicle than hooping in front of millions.

If Roy Hibbert was a foot shorter, he might never have picked up a basketball, and might be a CPA or IT professional who amused and frustrated co-workers in equal measure with his mood swings.

Because he is 7’2″ and athletic enough, Hibbert is a professional basketball player who will continue to command more money for playing 82 games each season in the NBA than he would have earned in five lifetimes writing computer code.

Hibbert will play for the Los Angeles Lakers next year instead of his previous employer, the Indiana Pacers, because a change of scenery was required – for Hibbert, for the Pacers, for Pacers fans, and for anyone in Indiana who wanted to watch professional basketball unencumbered by rumination of why that tall fellow with a propensity for falling down always seemed so unhappy.

The arc of Hibbert’s ascent and descent lasted exactly seven seasons.  The Pacers traded for his draft rights in 2008 at the very end of Jermaine O’Neal’s run of uneven play, and fans wondered just what the hell the Pacers were thinking in acquiring the awkward center.  Hibbert was a very enthusiastic cheerleader/part-time player his rookie year, and that was enough for fans tired of O’Neal’s petulant act.

Hibbert blossomed into a two-time all-star before regressing least season amid moments of bliss and revulsion.  Hibbert can be equally engaging and off-putting, and in 2015, fans and media got a lot more of the latter.  An elite rim protector, Hibbert retained some value as a defensive specialist, but scored in double figures in only 40 of the Pacers 82 games.  Without Paul George available for the majority of the season, off nights on the offensive end for Hibbert made life difficult for the Pacers and their fans.

The unraveling seemed to start with Hibbert’s infamous “No homo” comment during the 2013 Eastern Conference Finals against the Miami Heat.  The Pacers were the darlings of the NBA – a bunch of team-first non-stars battling tooth and nail with a Heat team built around the game’s best player, LeBron James.

His comment, which followed an explanation of how LeBron “stretched me out so much,” amused him, but caught the attention of everyone else for all the wrong reasons.  From that point forward, a schism between Hibbert and the media was created.  The formerly agreeable and funny center withdrew, and even among those who were employed by the Pacers, he became a distant participant with the media.

Being famous requires a calloused psyche that the sensitive Hibbert never developed.

He was compared by fans and media to a baby giraffe because of the difficulty with which he struggled to his feet, and after Pacers president Larry Bird said his team would be faster next year, it was assumed to be a condemnation of the style of basketball Hibbert is best suited to play and a decisive shove toward the door.

Hibbert opted to exercise his player option for next season worth $15.5 million, but it was still assumed that he would be aggressively shopped and moved if the right deal materialized – meaning someone would be willing to accept the burden of signing his paychecks.

And so Hibbert will move on to Los Angeles and a harsher media spotlight.  The fresh start with require Hibbert to mature, developing that thick skin that would give the media and fans a sense that he is participating and engaged even when he isn’t.

For the Pacers, they will invest that $15.5M in talent that will help them play the kind of basketball the NBA clearly wants to reward – fast, fun, high scoring (three terms as ill-fitting of Hibbert as a size seven ladies pump).  For the Lakers, they will wait for Hibbert’s money to come off the books so they can pursue the high-end free agents they crave next offseason.

The deal is a win-win for the Pacers and Lakers regardless of what Bird gets in return, but whether it suits Hibbert will depend on his ability to embrace fame in the city where it’s the only currency that matters.