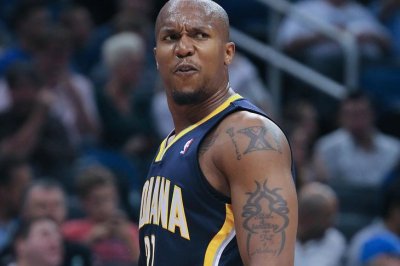 Even if David West’s game took a step back last season, his scowl will be intact as a poorly paid reserve for the San Antonio Spurs.

I liked David West, but it’s hard not to see his decision to leave $11.1 million in Indiana to play for the San Antonio Spurs as a smack to the jaw of the Pacers organization, his former teammates, and Indiana in general.

His desire to win a championship is laudable.  Putting potential wealth beneath winning as priorities are set is usually viewed as a positive, but this cash dump is not just a statement about West’s desire to win, but his thirst to do it in a lesser role for a city other than Indianapolis.

The Pacers for which West played last season were on win away from earning an unlikely spot on the playoffs despite injuries that robbed them of any semblance of continuity.  Paul George’s fractured leg was especially difficult to overcome, but if they had beaten Memphis in the season finale, they would have played an Atlanta Hawks team they had vanquished during the previous two postseasons.

So close, but not close enough for West to see the Pacers situation as hopeful enough to return to the team for the $12.6 million his player option would have activated.  Instead, he opts out, and signs with the Spurs for barely more than 10% of that amount.

Sure, the Spurs have a better chance of winning an NBA Championship than the Pacers, but in the Western Conference with Houston, the LA Clippers, Oklahoma City with a healthy Kevin Durant, and the reigning champion Golden State Warriors, the road through the playoffs will be arduous.

The Pacers might be in a period of transition toward a faster style of play, but with George returning, George Hill back for what he hopes is a full season, rookie Myles Turner replacing struggling center Roy Hibbert, and the explosive Monta Ellis coming over from Dallas, the Pacers look to be significantly better than last season.

As Indiana fans look for reasons to hope the Pacers will be successful in moving toward the kind of small and fast basketball toward which the NBA is enacting and enforcing rules, West leaving eight figures worth of money on the table to serve as a back up behind Tim Duncan and newly acquired LaMarcus Aldridge does not qualify.

In fact, West leaving appears to be a resounding repudiation of the Pacers culture and future hopes for the franchise’s first championship.

Sure, West seemed unhappy with the vibe of the team last season, but turning your back on over $11 million is a hell of a demonstrative way to show it.  He could have opted in, pocketed the cash, and become a free agent next offseason.

Maybe this will be the last chance for West to be a part of a team with Duncan, Manu Ginobli, and Tony Parker, but when season tickets to watch one of the greatest threesomes in NBA History cost less than $50K, is it really worth over $11 million to play with them?

West has always marched to the beat of his own drummer, but when that rhythm is so far out of cadence with the Pacers expectations for 2015-2016 and with the appreciation of Pacers fans for his effort – whether well-earned or not – questions need to be asked and judgments need to be made.

David West abandoned ship – turned his back on teammates and fans.  He has shown himself to be worse than a money grubber; West is a win grubber – eager to play a limited role on the Spurs rather than a prominent role on a Pacers team trying to rebound from a disappointing season.

As a result, West has shown himself to be unworthy of the respect once granted to him by Pacers fans.  What a disappointment.

6 thoughts on “Indiana Pacers – David West would rather earn $1.5 million with Spurs than $12.6M with Pacers”