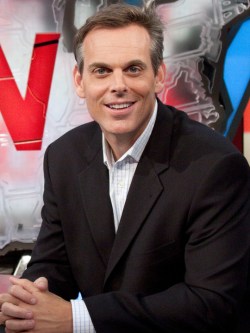 Colin Cowherd a goner at ESPN because he stepped on a third rail management might have helped him avoid.

Colin Cowherd is a great radio talent whose mouth gets ahead of his brain once in a while.  He believes that because he tries to tell the truth as he sees it that everything he says then must be the truth.

That’s a philosophy that leads to great success for sportstalk hosts, but can also make for disastrous mistakes.

Management is key for a talent like Cowherd because without perpetual reminders that words can have consequences, they tend to wander into trouble – as Cowherd did by insulting Dominicans en masse as ignorant yo-yos who would be incapable of playing another sport professionally.

Cowherd used to be managed by a very capable guy named Scott Masteller.  Scott worked hard to help Cowherd become the dynamic talent that he is, and when Scott moved on from ESPN, I wondered how Cowherd might respond.

This wasn’t Cowherd’s first time saying something Trumpian, but because he was a short-timer it will be the last at ESPN.  It’s not that Cowherd was wrong in his assessment – I don’t personally know enough Dominicans to have an educated opinion about their level of intellect, although I have found that smart people are everywhere in similar ratios.  It’s that a group ESPN wants to maintain a positive relationship with are upset, and Cowherd is leaving.  Easy (if gutless) decision.

Cowherd decided over the last few weeks that leaving ESPN would provide a greater challenge, and he is headed for Fox Sports 1.  He was continuing to work at ESPN a period of time that had yet to be announced.

Managing talent requires them to understand that honesty is a compelling force for good until it disturbs broadcast partners like Major League Baseball, the National Football League, the National Basketball Association, and other leagues that supply much needed play-by-play to networks/stations.

While partners understand the need for unvarnished commentary to drive consumption of sports media, there are consequences for rubbing raw those who run the leagues.  ESPN’s slate of Monday Night Football games is wretched compared to those in previous years.  Is that because the NFL was more than a little honked off at ESPN for zealous coverage of Roger Goodell’s responses to the Ray Rice debacle?  No one will admit to it, but it’s a good bet.

With Cowherd, MLB was eager to defend the significant percentage of players from the Dominican Republic, and given that he’s is a short-timer, the decision to punt was easy for ESPN.  Adios!

Management can keep talent apprised of the dangers of overstepping into the kind of outrageous generalizations that Cowherd espoused, so now he becomes Fox’s challenge.

Will a high dollar free agent signee like Cowherd be eager to accept a mandate that he tone down the divisive rhetoric, or will he dance with the girl that brung him.  It’s a hell of a lot easier to get the attention of a host who is grateful for being discovered, as Cowherd was at ESPN, than to cajole compliance from a host that has been told he’s the greatest thing since sliced bread while being compensated beyond logic.

Fox has partnerships that are critical to its success, including those with the NFL and MLB, the same people who were so agitated by his remarks.

While sitting alone in a room every weekday for three hours, it can become easy to amuse yourself.  It takes discipline to avoid the third rail topics that can define and wreck a career.  That discipline is supplied by high quality management like Masteller, who always put the needs of his talent and operation ahead of his own.