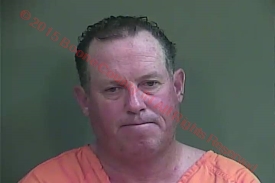 Jack Trudeau shortly after being arrested for driving while intoxicated and public intoxication.

Jack Trudeau was arrested at 12:44 this morning for operating a vehicle while intoxicated and public intoxication by Zionsville police.

This isn’t the first time Trudeau has run afoul of the law for alcohol related issues.  He was arrested for striking a cop in a bar fight and driving while intoxicated in separate incidents a quarter century ago, and was also charged with supplying alcohol to minors while hosting a high school graduation party for his son.

There is no excuse for driving drunk these days with Uber being a more convenient and cheap alternative to calling a cab.  It shows indifference to the well-being of others, and reflects a combination of stupidity and arrogance that requires a serious consequence.

My Mom worked with addicts for 30 years and has always said that multiple arrests point toward addiction being part of the equation for the accused.  If Trudeau is battling demons and needs help, here’s hoping he has the intestinal fortitude to seek it out.