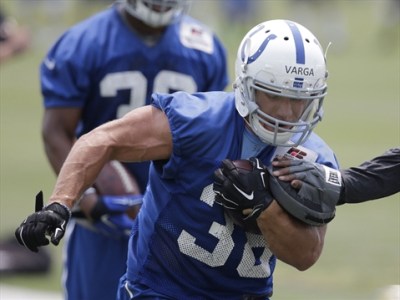 Tyler Varga is hoping he doesn’t get a call today to come to Chuck Pagano’s office.  Given his Yale education, he’s going to be okay either way, but he would really like to be a Colt.

Indianapolis Colts coach Chuck Pagano is going to tell 22 football players today or tomorrow that their lifetime of work to become a professional football player was wasted.

Some will cry, some will yell, some will quietly accept reality.  All will feel a measure of failure and misery.

At the end of the day, Pagano will be exhausted.  Firing people is draining.  Even when it’s expected by the victim, being the cause of hope being dimmed for those who have been praying for weeks they make be retained is beyond horrific.

Pagano knows that each of those 22 cuts he’ll make before tomorrow’s 4:00 p.m. ET deadline will be followed by phone calls to wives, girlfriends, moms and dads to share the bad news.  Each newly unemployed guy will feel like a failure, and the phone call will be terrible as he hears their hopes die.  For some, the feeling of being a failure will never go away.

That emptiness begins as soon as they walk into Pagano’s office, and then will be confirmed with his expression even before he says the words, “We’ve decided to let you go.”

Some of these players had no chance to make the team from the jump, but they love football, and that love drives a convenient and necessary blindness to their own critical flaws.  It will drive many to try to continue their careers in the arena league or CFL, followed by Augusts spent in NFL training camps where few dreams are granted for fringe players, but many die.

To have to extinguish the light from the eyes of 22 players in such a short period of time is the definition of a terrible day for a coach or boss.  That Pagano gets to bring some of the cut players back on the practice squad will be a nice consolation when those conversations take place, but for today, it’s only heartache on both sides of the desk.

As someone who has both fired others and been fired, I can tell you that those bosses say, “This is probably harder for me than it is for you,” are idiots.  It’s not.  Being fired is far worse.  Don’t get me wrong, firing people is among the worst responsibilities of a manager, but it beats getting canned.

The Colts are fortunate to have a leader like Pagano, who is seemingly empathetic and decent, pull those many triggers.  Being fired by a decent human being softens the blow a little bit.  Having someone communicate the bad news in a way that allows the former employees to retain some dignity is the least the company or team can provide.

As you hear the news about the cuts, remember that each of these former Colts have families who are as emotionally – and sometimes financially – invested as the players themselves.  Many will never put on pads again.  It’s a sad day for them.

That’s why we went to the meaningless game last night.  Men like Winston Guy, Kitt O’Brien, Tyler Varga, and Quan Bray were trying like hell to show coaches around the NFL something that might make them stand out.  Some did, and some didn’t.  While the game lacked traditional football drama, the players fighting for a job made the game interesting.

For the Colts, there is good news and bad news with the cuts.  The 53-man roster was damn near entirely set before training camp ever started, and while their might be a surprise or two, the guys on the outside have been aware that cut day would bring a call to step into Pagano’s office.

Many of the Colts who played last night went into this opportunity with their eyes wide open, and understood that the work was as much an audition for the other 31 NFL teams as much as for the Colts.

It won’t take the sting completely away, but knowing the end is nigh and to have the news delivered by a good guy like Pagano will make it a little better, but still it will suck all the way around.