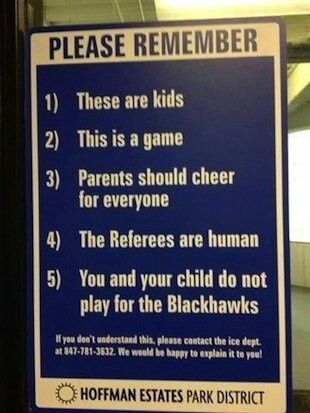 Signs like this are ignored by idiot sports parents all over America.

Parents watch their sons and daughters differently than everyone else at a high school sporting event.  They are invested – both financially and emotionally – in their kids’ performance and use by coaches, and some feel that investment confers a license to vent when frustrated.

And they are the most likely to ruin the experience for their kids, coaches, teammates, and fans.

I attended a high school football game last weekend as I often do, and had the unfortunate displeasure of sitting immediately in front of a buffoon whose mouth never shut.  His idiotic rants about the use of his son as a receiver was endless.  He may still be in the bleachers yelling at the coach.

His kid dropped a couple of passes in the first half, and his chances to redeem himself were correctly limited in the second half.  That didn’t sit well with the ill-informed loudmouth, “Hey coach! There are other kids on the field!”  “Hey coach!  Look at the other side of the field once!”  “Hey coach!  Start sharing the ball!”

I only sat near the guy because a friend of mine is the father of the team’s quarterback, and I was there to spend time with he and his family.  He sat near the blowhard, so I sat alongside.

Throughout the game, which was a couple hundred miles away from Indianapolis, I was tempted dozens of times to turn around and explain that the bleatings this guy could not restrain were not only expressions of delusion, but destructive to the enjoyment of the game for his son.

Every negative thought loudly expressed by this boob removed all doubt for the coaches and his son’s teammates that not only did this clown know nothing about football, but also very little about parenthood.

His son, who could undoubtedly hear his dad, likely hoped for some stranger in the bleachers to tell him to shut up.  I didn’t, because my friend didn’t need the headache of trying to make peace because an interloper from Indy indulged his need to puke wisdom at a guy who clearly has spent a lifetime ignoring it.

Loud parents are easily the worst element in youth sports.  Their self-immersed and unschooled invective will be heard at every high school football stadium tonight as kids run onto the field to answer the challenges defined by circumstance and game plans.

Moments that might leave a kid with a sense of pride will be turned on their heads into moments of shame and embarrassment as parents crow needlessly.  Coaches will drive home from the game wondering why they continue to put up with morons who want their kids showcased at the expense of teammates who may be more talented or harder working – as was the case with the dad I wrote about above.

The irony of the idiot sports parent’s behavior is they campaign against the very thing that makes high school sports such a wonderful educational tool for teens – the adversity that causes maturity and a sense that hard work allows a person to triumph.  Because many parents are morons who don’t understand that, they negotiate with and campaign against coaches to protect their progeny from challenges that might inspire them to work hard and earn self-respect.

This isn’t to say there aren’t good parents – or that idiots outnumber good parents – it’s just that the bad ones are so obviously wrongheaded and damaging, and that I was forced to spend 2 1/2 hours sitting in front of one last Saturday.

If you are a parent with kids playing sports (or in the band, theater, choir, or other collaborative educational endeavor), congratulate them, hug them, drive them to practice, and write those damn checks, but let them find their way through adversity without inserting your ignorant noise into the mix.

Other than love and cash, whatever you have to add to your kid’s experience isn’t going to help.