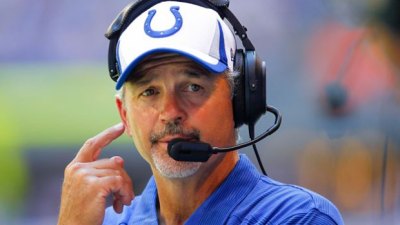 Chuck Pagano called himself a “dumbass” yesterday after calling timeout to freeze Jags kicker Jason Myers, but it worked out.

Yesterday’s game between the Indianapolis Colts and Jacksonville Jaguars was hard on the eyes – a tough to sit through debacle made palatable for Colts fans only because of the 16-13 overtime result.

That is took two missed potential game-winning field goals is not reflected in the standings that show the Colts sitting alone atop the wretched AFC South.

They won, and that’s all that matters – at least today.

The Colts only trip to the end zone was due exactly as much to the Jaguars missteps as the Colts productivity.  Half the 80-yards gained during the Colts drive were coughed up on Jaguars penalties – three of which occurred on 3rd down and resulted in first downs.

Gus Bradley is sick to his stomach this morning because there was no way the Jaguars should not have won that game – but they didn’t.

None of the statistics favoring the Jaguars matter because the Colts won the game, and in the NFL no one apologizes for losing.

Despite the lackluster level of football played by the Colts yesterday, not all the news was bad.  Good news includes:

Some of the not so good includes the Colts generating only five sacks on the season with no Colt posting more than one.

Andre Johnson has caught only seven of his 20 targets.  In a down 2014 for the Houston Texans, Johnson caught 85 balls with a catch rate of 58.2%.  He has never caught less than 55.3% of his targets.  As of today, his 2015 catch rate is 35%.  Either Johnson has suddenly gotten old, or he is not being utilized to capitalize on his strengths.  To me, he looks old.

The Colts running backs have lost an average of one fumble per game.

With a short week, the Colts don’t have a lot of time to correct what’s wrong or get Andrew Luck and injured inside linebacker Jerrell Freeman back from injury, but just as no one apologizes for winning, no one accepts excuses for losing.

If they find a way to beat Houston Thursday night, the Colts will win their 16th consecutive division game – an NFL record.  Whether the Colts AFC South dominance is a result of their consistent excellence or the awful level of competition offered by the Jags, Tennessee Titans, and Houston Texans depends on your perspective – and that is likely driven by geography.

In 49 states, fans would likely cite the ineptitude of the other three teams.  In Indiana, where fans see life through horseshoe shaped glasses, they see the Colts as the kings of the AFC South because their droppings don’t stink.

The 1-3 Texans fell behind the Atlanta Falcons 42-0 before recovering late to make the score a cosmetically less atrocious 48-21, so maybe the Colts can limp into another win against a bad team to push their record to 3-2 before the Patriots come to town for Sunday Night Football October 18th.

That is the night the Colts bills for mediocrity might finally come due.