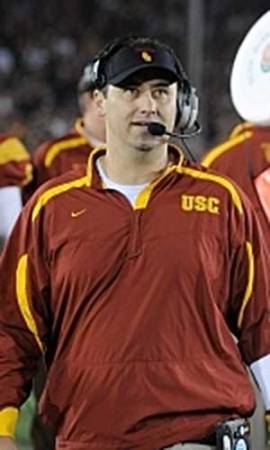 USC football coach Steve Sarkisian is facing a tougher foe than the Fighting Irish this weekend, and it doesn’t need to be made any tougher.

Dealing with addiction is tough enough when no one knows who you are and you can begin the process of recovery in anonymity.  When you are the face of a historic football program and open yourself up to taunting immediately prior to a rivalry game, I’m guessing it’s brutally tough.

USC football coach Steve Sarkisian has been asked by his boss to take an indefinite leave of absence because he reportedly showed up for a team meeting yesterday intoxicated.

Staff suspected he was tanked during the game September 26th against Arizona State, and the national media had a field day with his drunken performance at the university’s Salute to Troy event in August.

Sarkisian is going through a divorce, and is obviously making decisions that are not in anyone’s best interest – especially his own.

But this is not a guy who is irresponsibly choosing a night in a bar rather than doing what otherwise is on his itinerary.  Sarkisian has a disease, and that disease has a cure that involves a drastic evolution in behavior.

I’m not an expert on addiction, but I do understand that empathy for Sarkisian is a more humane response than derisive chatter.

It’s easy to think of a guy who has worked tirelessly over the course of a career to reach this pinnacle as the coach who leads the Trojans into battle each autumn Saturday only to piss it away by irresponsibly boozing it up, but when social drinking becomes addiction, a person loses control over where and when he or she drinks.

Sarkisian is in a dire place.  He can choose to turn himself over to a treatment facility a one who suffers from a disease, or he can view himself as a failure who cannot manage correctly any part of his life and then continue down his current path of self-destruction.

What’s going on with Sarkisian is sad, not funny, and with USC coming to South Bend this weekend to play rival Notre Dame, the temptation for the students in South Bend will be enormous to have some serious fun at the expense of both Sarkisian and the Trojan program.

I’m not proud of what my decision would be were I in the same spot as the ND students this weekend, and I doubt they yet have the wisdom to make the right choice, but maybe the Irish are more enlightened than I was as a Hoosier eager to pick at the scabs of those suffering through a problem the likes of Sarkisian.