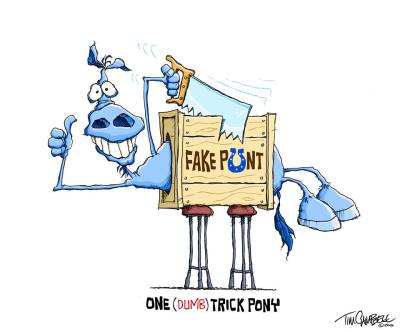 Editorial cartoonist Tim Campbell perfectly captures the play that will certainly be a big part of Pagano’s legacy in Indianapolis.

First, do no harm.  Good rule for doctors – and football coaches.

Chuck Pagano’s decision to try to trick Bill Belichick and the New England Patriots Sunday night was a true “What the hell?” moment.  Sixty hours later, after the curtain was finally peeled back to reveal the reason the play didn’t work, it seems even crazier.

Punter Pat McAfee visited the Bob & Tom Show yesterday and explained what was supposed to happen, and gave a reason why it didn’t work – and more importantly why it should never have been called.

Safety Clayton Geathers was supposed to be the center on the play, and he was schooled as to the audible that was called.  Sadly for the Colts, Geathers was injured in the second quarter and was replaced by wide receiver Griff Whalen, who was unaware of the audible.

“The gunner who became the center all week was Clayton Geathers.  Geathers gets injured in the second quarter. Insert Griff Whalen, who had never done it before. So Griff Whalen is now the new center in a play he’s never practiced before.

“Griff never got the heads up this was happening because it’s not in the playbook. [He’s a] Stanford guy, reads the playbook, knows everything he has to do, but if he’s not there for an audible that’s added, he can’t know.

“The point of the play is a deception play.  So you’re trying to manipulate the [Patriots] into thinking they have to sub their defense back on. We are sprinting to the sideline in hopes to make the other team think we are subbing our offense back on the field.”

The result?  One of the most embarrassing moments in franchise history during a game where the Colts were competing very nicely with the undefeated defending world champions.

Throughout the game, the Colts were very close to the Patriots statistically, and minus this crazy play, which handed the Patriots 50 yards of field position and led to a touchdown just over three minutes later, this game was a coin flip.

A great rule of life is to never prank the prankster.  Out clearing the clever is not only difficult, it motivates what is usually a more clever and destructive response.  Pagano is a great guy who is loved by his players, but he is not Bill Belichick.  Belichick’s strategies run from the blatantly illegal to uniquely arcane.  He is a bear not to be poked, the chess master who will not fall for the Blackmar-Diemer Gambit – a master strategist.

Because Pagano felt the need to prank the prankster, the Colts looked like boobs Sunday night in front of a national audience, and because Pagano decided to explain the play’s failure incompletely but accurately as a “communication breakdown,” Bob & Tom felt the need to ask the NFL’s most honest man to peel the onion.

So now we know that Whalen was not the stooge in this farce.  He was a pawn asked to make a decision for which he was not prepared.  That’s a communication breakdown, but the responsibility belongs specifically and only to Pagano, who should have been aware of the Geathers injury before making the call for the fake.

And Pagano should have had the stones to tell the truth during the postgame press conference so McAfee didn’t even have to be asked, and Whalen wasn’t surrounded by reporters in the locker room wondering what the hell happened.