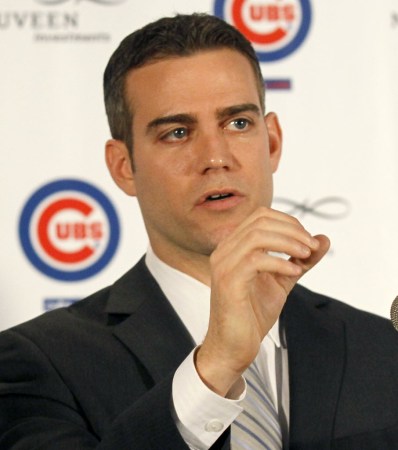 That’s the epitaph for the Chicago Cubs the day after one of the weakest showings in the history of postseason baseball.

Regurgitating the obvious – anemic offense and defensive ineptitude – serves no purpose.  There was no ‘what if’ moment during the first four-game sweep of the Cubs since Lou Gehrig played first base for the Yankees in 1938.

And so another opportunity to advance to a World Series for the first time since 1945 passes, and a championship the north side of Chicago has dreamed of since Teddy Roosevelt was president will have to wait at least another year.

The feeling among Cubs fans and Chicago media is that 2015 sets the table for a generation of success the likes of which has never been experienced by the Cubs.  Success is headed for Wrigley Field like a freight train with no brakes on a track without a switch.

I remember feeling the same thing in 2003 after the last NLCS failure.  Mark Prior, Carlos Zambrano, and Kerry Wood were destined to anchor a championship rotation for a decade after that a one in a billion foul pop that was too tempting for Steve Bartman to avoid ruined the series against the Marlins.  In 1984, the Cubs were stocked with young talent that would find a way back to another Game Five where a ground ball wouldn’t snake through Leon Durham’s legs.

The three seasons that followed 1984 and 2003 showed a decided regression, and the wait for a World Series appearance continues.

No doubt the Cubs farm system is stocked with talent at a level fans have never witnessed, and with Joe Maddon as the manager, the Cubs future has never been brighter.

Been there, done that.  Kind of.

I’m not here to piss all over the 2016 parade that Cubs fans have planned for early November a year from now.  Not at all.

Jorge Soler, Kyle Schwarber, Kris Bryant, Javy Baez, Addison Russell, and Anthony Rizzo is the best core of young talent in the game (and for the Cubs since the late 1920s, and they project well, but the opportunity lost by the Cubs this week is worthy of regret.

The Mets are a flawed team, and their best player is a guy named Daniel Murphy who homered in every single game against the Cubs as well as the previous two against the Dodgers in their NLDS.

It would have been nice to see the Cubs change their approach to Murphy – or stick one in his ribs to try to reboot his locked in approach at the plate.

The Mets hit in good luck, and it seemed every line drive off a Cubs bat was at a well positioned Mets fielder.  All of the fastballs in the world aimed at Murphy’s torso wouldn’t have changed the result of this series, but hoping things will change rather than making them change because the future is so bright assumes facts not yet in evidence.

I’m bullish on the Cubs future, but not to the extent that I don’t see the 2015 NLCS as an opportunity lost.

What comes in 2016 could be magical, or it could be a regression to the mean.  That’s baseball, and every time Cubs fans have assumed impending glory, the following season has been miserable.

Optimism will make the offseason fly by, and my caution is not meant to diminish it.  What we should all do is enjoy the periodic Octobers where the Cubs get another trip to baseball’s final table.  Eventually, line drives will fall, and line drives hit toward Schwarber will be at him instead of just in front or just behind him.

The skies on the horizon are crystal clear, but Cubs fans who have been around a while know that assuming they will stay that way are denying lessons learned in 1985, 1990, and 2004.

The Cubs brain trust needs to make the future happen, not wait for it.