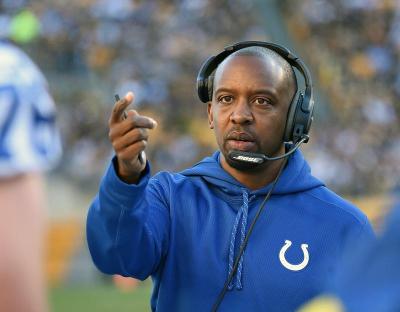 Pep Hamilton was the first to go, but his firing will likely only buy others time.

Jack Nicholson told a story in an interview about how prisoners in concentration camps who were murdered with poisonous gas by the Nazis were found.  Men on top, women beneath them, and children at the bottom of the pile.

A vent was near the ceiling and the higher up people went, the longer they survived.  The strong stood on the weak for a few more seconds of life.  While hardly noble, a human being’s instinct for survival is strong.

That’s how professional life works with most people too, and so as the pressure of a 3-5 record for the Indianapolis Colts became too great, Pep Hamilton was trapped on the floor under the weight of general manager Ryan Grigson and Chuck Pagano as they fight to get closer to the vent.

All are doomed, minus a miracle reversal of fortune doing the second half of a season where expectations were so high not so long ago, my hair is now blond (a story for a different time).  But that won’t stop the Colts bigwigs from fighting for their own survival.

Was Pep Hamilton a great offensive coordinator?  Not by any reasonable statistical measure.  One of his predecessors, Tom Moore, was great.  He quietly put players in a position to succeed, and many became stunningly productive assets.  Several are or will be hall of famers.

Like many really smart guys, Hamilton always seemed determined to outsmart defenses rather than put his players in a position where they could best succeed, but whatever problems have caused the Colts to stumble so badly – especially in the early portions of games like last night’s thrilling debacle in Charlotte – Hamilton is but a small cause.

There are issues like the almost complete lack of pass rush for which Hamilton cannot be held even remotely culpable.  Vontae Davis and Greg Toler were not exactly shut down corners last night either.  The quality of the drafts and free agent signings were not in Pep’s arena either.

If Hamilton’s firing buys Pagano a little more cover, or maybe more to the point allows him to go out with the staff of his choosing, at least he and the Colts can be sure the right move is made at the end of the season if Pagano needs to go.  From this point forward, Hamilton cannot be used as a scapegoat.

Grigson hired Hamilton to replace Bruce Arians, who accepted the head coaching position with the Arizona Cardinals after leading the Colts to the playoffs during Pagano’s convalescence as he successfully fought leukemia.  Pagano brought in Rob Chudzinski as a special assistant over a year ago, and he was promoted to associate head coach after the 2014 season ended.

Chudzinski will replace Hamilton, and at the very least Pagano will now be able to sink or swim with his own staff.

Hamilton became a more likely patsy with each week for a variety of reasons, not the least of which was his relentless desire to accept responsibility for all of the offense’s woes.  Every damn week, Hamilton would stand at the podium to claim guilt for all offensive misfires during the previous game.

Pagano was (and is) much more politic.  When he accepts responsibility, it’s a vague admission bereft of elocution for the specific crime of which he is guilty.  He initially received a bit of credit for saying the chaotic fake punt against the Patriots was on him until it was revealed what specifically Pagano was actually guilty of.  The vague falling on the sword did nothing to provide Griff Whalen cover for snapping the ball.

The Colts may have solved a problem today, but when the story of the Colts 2015 season is written and complete, Hamilton’s role in it is much more likely as a fall guy rather than a root cause of the serious problems that have caused this team to stagger through a three-game losing streak with a fourth straight tough game ahead Sunday against the NFL’s best defense.

Hamilton might be at the bottom of the pile as those standing on him fight for oxygen, but he likely won’t be the last to be offered up as continued hope is sold to fans by the Colts.