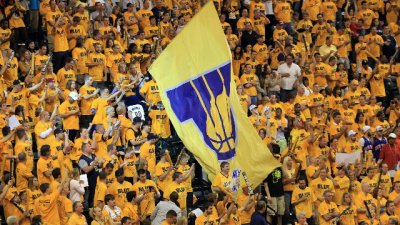 2015 is an odd year for sports fans in central Indiana.  Optimists have plenty of reason to feel smart, but pessimists are justified in their negative thoughts.

The Colts, Pacers, Hoosiers (basketball & football), Bulldogs, and Boilermakers (basketball) are all teetering between realizing their goals and falling off a cliff.

1 – Colts defense clicked over top of Falcons.  Forget the offense for a minute because the offense didn’t win that game yesterday against the Atlanta Falcons.  Donte Moncrief made a great special teams play to down a Pat McAfee punt at the Falcons one, and on the first snap, D’Qwell Jackson picked off a Matt Ryan pass and took it into the end zone for a game tying touchdown.  Minus that play and the pressure on Ryan, the Colts are 4-6 – one game back of the Houston Texans in the AFC South.

2 – Purdue slammed the door on Florida.  Okay, Florida isn’t great, but the Boilermakers win in the championship game of the Basketball Hall of Fame Classic featured a stretch of withering defense and unselfish offense that left fans dreaming of Purdue playing in April for the first time in – well, ever.

3 – The Pacers have won eight of ten.  When Indiana lost the first three games of this young season, fans worried that the uptempo offense necessitated by the departures of bigs David West and Roy Hibbert might take weeks if not months to gel.  Suddenly, the Pacers season switched course and wins started to pile up.  Even better, the two losses of this solid ten game stretch at Chicago and Cleveland (two of the better teams in the East) were within the grasp of the Pacers if they had hit a shot or two.

4 – IU defended okay against Creighton.  The complaint about the Hoosiers since Tom Crean took over as coach in 2008 has been the lack of defense the Hoosiers displayed.  Opponents routinely shot exceptionally well against Indiana whether the Hoosiers won or lost – and they have both won and loss in virtual equal measure over the past two seasons. Late last week, IU limited a challenged but competent Creighton team to 3-18 shooting beyond the arc, and 45% overall.  It speaks to the Hoosiers poor defense that allowing an opponent to 45% shooting represents an improvement, but it does.  Fans will see what happens in Maui to either reveal the Creighton game as a fluke or the beginning of an era of capable play on the defensive end.

5 – Butler has been good despite Kellen Dunham shooting poorly.  Despite yesterday’s loss to Miami, Butler has been as advertised as they have defended with tenacity and shared the ball.  Yesterday’s loss came to an exceptionally long team by 10 points on a night when Kellen Dunham made only six of 17 field goal attempts.  Against Temple, Dunham was five for 20.  When he starts knocking down shots, Butler is going to be a tough out in the Big East.

6 – Colts special teams are rolling.  Pat McAfee is establishing himself as the best punter in NFL history.  Adam Vinatieri is already thought of by many as the best clutch kicker in NFL history.  Matt Overton never misses a long snap, and Quan Bray (no relation to former WISH-TV8 meteorologist and news director Steve Bray) looks like a legit return man.  That leaves the offense – long thought to be the Colts strength as the missing link to a championship.

7 – Paul George is playing like a first team All-NBA player.  Until fans saw George play at a pre-injury level, there was a little doubt that he would.  That doubt is gone as George has re-established himself as one of the best two-way players in the game.  He’s scoring and rebounding at career best numbers (24.8 and 8.5), and because of his excellence, the Pacers have not missed George Hill, Rodney Stuckey, and Myles Turner during a recent stretch.

8 – Matt Painter’s tool box is well-stocked.  With P.J. Thompson solid (and then some) at the point, Purdue is strong everywhere.  The wing play is good with Vince Edwards, Rapheal Davis, and Dakota Mathias, and few if any teams in college basketball have three bigs like A.J. Hammond, Isaac Haas, and Caleb Swanigan.  There are no holes in this lineup, nor any excuses for playing at a less than Big 10 championship level.

9 – Indiana is one win against Purdue away from bowl eligibility.  That speaks for itself.

Don’t let your excitement or the optimism reflected in this list turn lead to a financial investment because for every optimistic notion, there is at least one reason for pessimism.  But there is legitimate reason to look forward to the next game for every one of the teams for which we cheer in this neck of the nape.