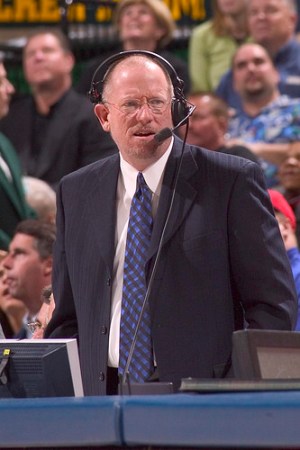 Mark Boyle does his job with relentless professionalism and borderline perfection.

[Ed. Note – These are not rankings, and since their original publication early this morning I have removed the numbers to alleviate any confusion.  Seems several of the people listed were quite sensitive as to where they fell on the list.  I literally drew their names out of a hat  to determine the order.  There is no ranking the amount of esteem in which I hold these people.]

This is by no means an all-encompassing or complete list of either my favorite or the most important sports media members in Indiana – just a group that is really interesting to me for a variety of reasons.

I haven’t included a healthy number of journalists I thoroughly respect just because extolling their virtues would be a dull and repetitive exercise.  For example, the Indianapolis Star’s Stephen Holder and Zak Keefer are both remarkably talented writers covering the Indianapolis Colts.  Both are very nice guys.  Both do their jobs at the highest level.  There are a lot of people like that in town, and frankly reading a paragraph devoted to each would be drudgery for you.  I will save the TV anchors for another list entirely for the same reason.

Here are nine (in no particular order) really interesting people who devote their time and attention to providing you with fascinating coverage of Indiana sports:

Malcolm Moran – Sports Capital Journalism Program at IUPUI  Not only is Malcolm a great story teller and hall of fame basketball writer, he is training young journalists to answer the challenges of an ever evolving multi-platform sports content generation business.  His students learn that it isn’t writing that makes a post/column great; it’s editing.  While it’s wonderful that anyone with a laptop and a few bucks to buy a URL and website design on wordpress can become a well-read contributor to a sports perspective marketplace, men like Malcolm are working diligently to ensure they know what the hell they are doing and what their responsibility is in telling the stories of games/athletes/coaches.

Dan Dakich – 1070 the Fan  Dan’s show is a wonderful example of entertaining sportstalk radio.  Dan innately knows how to build drama through conflict with other media members and players/coaches.  While most people in life shy away from acrimony, Dan pursues it like a shark looking for an angry and challenging walrus.  Even the crazy stuff (singing) that no one would ever ask of a talk host works because everything Dan does is either in the name of truth seeking, drama embracing, or fun.  Like most great hosts, Dan has no tolerance for boredom.  He needs relentless stimulation, and as a result his listeners are relentlessly stimulated themselves – sometimes happily, sometimes not.  Both are good.

Jay Graves – thejaygravesreport.com  Jay is a passionate purveyor of sports perspective that instructs about life.  It isn’t easy to wake up every morning to lend your voice to the daily discourse, but Jay does it consistently with purpose and good humor despite having a day job as a pharmaceutical rep.  College journalism students who whine about a dearth of professional opportunities can learn from Jay that you don’t need a job to do great work.

Bob Kravitz – WTHR/WTHR.com  As a columnist in a business that rewards clicks, Bob never trolls because the truth is all he cares about.  I’ve never read or heard Bob write or say anything that I wasn’t sure he truly believed.  He doesn’t pull punches, is always circumspect, and has the stones to confront those whose methods he questions in advance of publishing his thoughts.  If Bob is the sports conscience of Indiana, he is well cast.

Conrad Brunner/Mark Montieth – 1070thefan.com/pacers.com  There are pros, and there are pros.  Conrad and Mark love being professional sportswriters, and they are very good at it.  Formerly with the Indianapolis Star/News, both guys have continued to find ways to stay relevant and to provide Hoosiers with great content.  Both have become very adept electronic media talent, and demand with their continued excellence that the graduates of Malcolm’s program at IUPUI need to sharpen their pencils, hone their skills, and become keen listeners if they want to compete in this business with people willing to adapt to this quickly evolving media landscape.

Sam Beisheizen – Indiana University  When Sam worked for the Indiana Daily Student, I had him as a guest on my radio show a number of times because he is not only really smart and knowledgeable, but relaxed in a way that allows him to perform very well on the radio.  The first time I spoke to him, I thought, “Holy s**t!  This guy is 19?”  Sam not only crazy verbal, but possesses a wisdom – an ability to take seeming disparate facts and convene them in a way that results in unique and valid perspective – that will make him a Bernie Miklasz/Tony Kornhiser style star if he gets bored being a Dean’s List student at the Kelley School of Business.

Jersey Johnny, 1070 the Fan  Jers is funny, quirky, and friendly.  My hope when I was at WIBC was to make him an overnight host because he is likable, relentlessly energetic, sincerely opinionated while also kind, and has an ear for what is both interesting and positive for the community.  Jersey Johnny is proof that there are radio hosts all over just waiting to be discovered by people willing to look hard enough.

Mark Boyle – Indiana Pacers  Describing 90-110 professional basketball games every season in the same city to the same audience for 25 years requires a hell of a lot of discipline, and doing it at the absolute highest level without getting a little bored with the process would seem impossible.  Yet Mark has done exactly that, and I cannot remember a single time when I questioned his professionalism, energy, or verbal dexterity.  Whether he is the best in America at bringing a sporting event into the homes and cars of listeners is impossible to say because I haven’t heard half the people with that job, but I cannot imagine anyone better.

Again, these are not rankings.

We are lucky in Indianapolis to be served by such a wide array of sports content creators, and these are but a few of them.  Enjoy the work done by all these men.  And I recognize there are no women on this list.  There are several on TV that deserve mention, and Candace Buckner does good work for the Star as she covers the Pacers.  For reasons described above, we didn’t list Star or TV folks here.

If you enjoy listening/watching reading sports content in Indy, you are very fortunate to be served by a wide array of talented people.