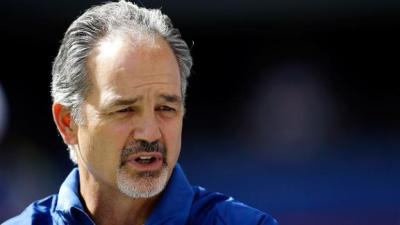 Despite the worst loss of the Chuck Pagano era, the Colts still control their playoff destiny. Because of that, none of the whimsical responses to a bad beat listed below are necessary.

The Indianapolis Colts allowed an improving but inferior Jacksonville Jaguars team to run away with the first AFC South matchup the Colts have lost in three years.

Fortunately for the Colts, the game ended after 60 minutes because the 51 points the Jags tallied could easily have exploded to 60 or 70 with another five minutes on the clock.

What makes this loss all the more galling is the fact the Colts led this soon-to-be debacle 13-3 with under two-minutes to play in the first half.

You can bet owner Jim Irsay was steaming in his suite – hotter than hot, face red as Rudolf’s nose – as the Colts went from executing well enough to beat a team that has drafted in the top 10 in every draft since 2008 to twisted human wreckage incapable of competing in any phase.

The Jags suck, but today the Colts sucked much harder.

In quality NFL organizations, anger is allowed to subside before big calls are made about the direction of a team.  Deep breaths are taken, and circumspection is embraced by quality leadership.  If a coach were fired every time an owner got angry, none would survive a season.

The Colts have been a steady-eddy franchise since Jim Irsay took over as owner from his father in 1997 with two GMs anointed, four coaches hired, and two starting quarterbacks acquired.

If Irsay was a nut, Pagano was a kook, Grigson had bubbles in his think tank, or fans were manic loons, they might indulge lunacy with any and all the following moves to overreact to what was by all accounts a pathetic performance in Jacksonville:

1 – Irsay fires Chuck Pagano.  A seemingly agreeable environment in the front office was revealed as anything but when Irsay and general manager Ryan Grigson made the call to not offer Pagano the level of extension Pagano believed he deserved.  After three straight 11-5 seasons, Pagano felt he deserved better.  It is assumed Pagano is a goner unless the Colts qualify for the Super Bowl, and those prospects look bleak after today.  If Irsay was a mentally unstable owner, he would fire Pagano before the team plane lands in Indy.

2 – Irsay vows to open roof regardless of conditions last two home games.  As a consequence for fans who took to Twitter in droves to express their dissatisfaction during today’s collapse, Irsay has decided to hit them where it hurts – in their need to be snugly indoors while watching football.

3 – Fans cancel season tickets.  “Ahh, to hell with these clowns!  After what the Jags did to Hasselbeck, if I had been out there, I would have put Bortles down!  If they aren’t going to compete or even back up their senior citizen QB, I’m done writing checks!”  Good thing for the hundreds of fans who screamed that today while watching on TV that the Colts ticket office is closed Sundays.

4 – Grigson signs Trent Richardson as free agent.  If Grigson is going to go down, he’s going down in a blaze of glory.  He thrives on fans’ confusion, and nothing could baffle them like the return of T-Rich – the 25 year-old washout for whom Grigson dealt a first rounder.

5 – Grigson fires Rob Chudzinski.  Another delay penalty – and this one inside the Jags 10 – and a lack of sustained drives against a defense that has trouble getting to the QB causes Grigson to expel the second OC in six weeks.  Four-of-16 in third down efficiency is not going to get the job done, and so empty boxes await Chud as he returns to the Colts Complex.  An entirely reconstituted offensive line might be a better reason for the issues than Chud’s calls, but Grigson demands Chud’s head.

6 – Denzelle Good changes his name.  After Pagano yells in a film session that Good isn’t good enough, Denzel changes his last name to “Better”.  Pagano then asks why he stopped at “Better” and he shoots for the moon by becoming Denzelle Bestest.

7 – Irsay fires Grigson.  Three straight blown 1st round picks (counting Phillip Dorsett, which is premature) and an offensive line with a seventh round pick at left tackle is causing mayhem has Irsay as his wit’s end.  If he’s going to make the change anyway at the end of the season, he might as well pull the trigger now.

8 – Pagano channels Billy Martin – pulls starting lineup out of a hat.  The result is David Parry at running back, Joe Reitz as a receiver, and Jack Mewhort as right tackle.  Wait a second, this may have been going on all season.

9 – Fans shoot their TVs.  Somebody has to pay for this mess, and it’s the damn TV that brings the bad news into our homes, so why not grab one of the firearms used by millions of Hoosiers to protect their homes and end the transmission before they are bombarded by more bad news?

10 – Irsay fires Bob Lamey.  Misidentifying players and outbursts of wild emotional highs and barely audible lows have earmarked Lamey’s 20+ annual performances for decades.  They are quaint when the Colts win, but when they lose, it infuriates fans and front office staff alike.  Irsay finally decides to cut the cord.

It bears mention that if the Colts win this Sunday at home against the Houston Texans, they will again be in the drivers seat to win the AFC South.  This season isn’t anywhere near as close to over as many fans believe it might be after being routed by the Jaguars.

Take a deep breath, relax, and hope for the best with three weeks left in a season that still has the potential to be very rewarding.