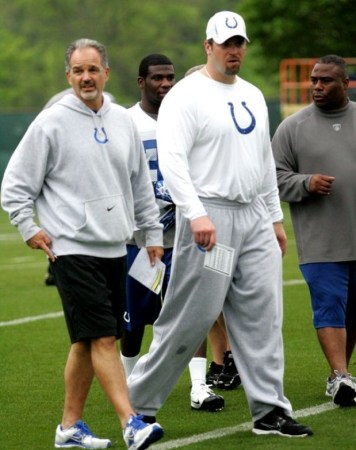 Colts coach Chuck Pagano and GM Ryan Grigson made the nice list, and are deserving of a Christmas gift or two.

Whether or not the men and women who play or coach our favorite teams, everyone deserves a stocking stuffer that can bring a better 2016.

Here are the top 10 Christmas wishes for those working in Indiana sports with the greatest needs:

1 – A higher draft pick for Colts GM Ryan Grigson.  After three straight 11-5 seasons, the Colts have used their first round picks on Bjoern Werner, Trent Richardson (via trade), and Phillip Dorsett.  The best record the Colts can have this season is 8-8, which means the Colts will draft higher than in any of those previous seasons.  Hopefully that reduces the chances of a fourth straight mighty swing and miss as the Colts try to get younger and faster.

2 – Someone in Paul George’s inner circle who will advise him instead of praise him.  When you are rich, people tend to treat you very nicely – basting your already ample ego with wild and relentless applause.  George plays basketball as though he takes all those compliments to heart.  George needs someone to regularly remind him that what is next trumps what has already been, and that whining to the refs is wasted energy.  Bad defensive possessions that result from attention being diverted to official lambasting are unacceptable for a team hungry for its first championship.

3 – Overwhelming homesickness for Brad Stevens.  This is actually not a gift for Brad, but for the Indiana University Basketball fans who long for a return to unfettered and unanimous support for the team they hold most dear.  Many Hoosiers fans have grown indifferent to the Hoosiers as led by Tom Crean, and they would like to see a change.  The consensus candidate to replace Crean is Stevens, if he can be wooed away from the Boston Celtics where he is thought to be one of the best young coaches in the NBA.  It’s more likely cash will succeed as an inducement than homesickness, but the source of motivation is less important than the result for Brad-happy Hoosiers fans.

4 – Continued health and focus for Matt Painter’s Boilermakers.  Physically, the Purdue Boilermakers check all the boxes for a team with designs on playing in the Final Four.  They have size, shooting, senior leadership, depth, a dynamic freshman, and occasional toughness.  if the Boilers can stay healthy and remain focused, they have a chance to do something very special.

5 – A bad two games for the Houston Texans.  The Indianapolis Colts need to win their last two games to stay alive in the AFC South race.  They also need the Texans to lose their final two, and the first of those two games is against the Tennessee Titans – the worst team in the NFL.  To make matters worse, Titans starting quarterback Marcus Mariota is out.  That means a Texans loss would truly be a surprise gift to the Colts.

6 – A long vacation for Chuck Pagano.  Barring a reversal of truly miraculous proportions, the Colts are going to miss the playoffs for the third time since 1999 and Pagano will be fired.  No one will rejoice in the end of his four-year run as coach of the Colts, but a vacation to celebrate a run to three postseasons that included a trip to the AFC Championship Game as well as his triumph over cancer is long overdue.  In a couple of weeks, it will be time for Chuck to take a deep breath and relax with a cool drink and warm smile in the bright sun.

7 – Continued evolution of Tom Crean’s leadership.  For a staff or roster to be comfortable with a leader, that leader must be comfortable with himself.  Crean has long looked like a coach who was uncomfortable in his own skin.  It always appeared that Crean was trying to outrun and outwork his fear that he was somehow unworthy of his position as coach at Indiana.  Over the last year, Crean appears to have accepted himself for who he is.  He may not be the right coach for this job, but that has never been Crean’s fault.  Crean didn’t hire himself.  Blame Greenspan, not Crean for that.  Let’s hope Crean can enjoy whatever time he has left running one of America’s storied programs.

8 – One more game for the old Colts where they are at their best.  People get old, and athletic skills fade.  That’s life.  But those skills can resurge now and again for additional moments of brilliance.  It would be nice for Colts like Mike Adams, Matt Hasselbeck, D’Qwell Jackson, Robert Mathis, Frank Gore, and Andre Johnson to enjoy one more afternoon of grace when excelling might again become easy for them.

9 – A Pinstripe Bowl win for IU Football fans.  The Hoosiers have not won a bowl in nearly a quarter century, and its small fanbase deserves a moment in the sun.  Watching the all-time losingest program in college football history is a chore that demands a little compensation in the form of a win this Saturday against Duke.  This would be nice for Kevin Wilson too but he’s only been around for a little more than 20% of this bowl victory drought.  Let’s gift this W to the fans.

10 – A happy and healthy final tour for Tamika Catchings.  Without Tamika Catchings, the Indiana Fever would not exist.  That’s a fact.  She has not only been one of the best players in the history of women’s basketball, but a great ambassador for her adopted hometown.  Her competitive fire and outstanding play has served as a standard for young women and men who dream of playing her great game at a high level.  As Catchings enters her final campaign with the Fever, she deserves the good health needed to allow her to enjoy one more successful campaign.

You might notice a lack of a gift for Chris Holtmann’s Butler Bulldogs.  They are they hardest group to shop for because what do you give the friend or family member who has everything?  Butler is like the self-made millionaire who spends time giving back.  They have all the stuff as well as the wisdom to know none of it is important without the right attitude.  The Bulldogs aren’t perfect, but no gift from us will improve their lot in the Big East or in life.  Their gift to us is displaying consistent excellence in deed and behavior.