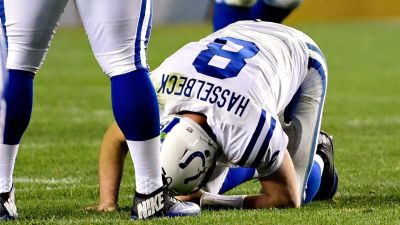 Watching Matt Hasselbeck put his body in continued harm’s way is inspiring. That’s a good reason to watch the Colts the next two Sundays.

Let’s face it, the Colts season ended with Griff Whalen’s fumble during the last gasp drive late in the fourth quarter that handed the Houston Texans a win last Sunday and the AFC South crown for 2015.

There are still reasons to watch the final two games for the Colts against two of the worst teams in the NFL – the Miami Dolphins and Tennessee Titans – and here they are:

10 – Dick Stockton might be doing his second to last game in Miami this Sunday.  At some point Fox is going to pull the plug on Stockton’s oddly long career, and with that decision his bland bleats will finally be silenced.  No one in the history of verbal utterance has communicated less while using more words than Stockton, and while he won’t be missed, the stunning consistency of his tedium will serve as a standard that bland play-by-play guys will strive to emulate for generations.

9 – Frank Gore is a beast.  As Gore’s career comes to an end (this season or next), he will be remembered as relentless, smart, and tough.  Gore loves playing football; his career is the perfect marriage between man and position.  While he will never be a part of the greatest all-time running back debate, Gore has been a marvel, and it’s been a privilege to watch him up close for a season and get to know him a very little bit.

8 – There is still a sliver of hope that the Colts can sneak into the postseason with an 8-8 record. Winning their final two games won’t be the tough putt in the equation.  It will be the need for the Texans to lose their final two contests against the Titans in Tennessee (minus Marcus Mariota) and at home against Jacksonville.  If the Colts couldn’t hold on to a 10-point lead last weekend in a game with the Texans, it’s unreasonable to expect the Colts to find a way to pick up this difficult four-pin spare, but where there is a chance, there is, well, a chance.

7 – Matt Hasselbeck is committed to finishing his career on his feet.  Watching Hasselbeck continue to return to the huddle with bumps, bruises, and aches mounting exponentially with every hit makes him a figure worthy of attention.  The question of how much pain he can take is now the compelling drama of the 2015 season.  The 40-year-old is being tested at a level most athletes never get to experience, and we get to see it all.  Hasselbeck will almost certainly retire at the end of the season, and playing until he can’t in these games will be among his proudest achievements.

6 – Chuck Pagano will continue to show selfless grace in the face of adversity.  “They can’t eat you,” is a refrain Pagano uses to describe his perspective on job security.  Whether Pagano is a great coach is worthy of argument, but his strength negotiating this unpleasant and likely final season as coach has allowed us to see how to deal with career reversal.  Watch and listen to learn the right way to move on after your dream job is taken through little or no fault of your own.

5 – Will the rest of the Colts exit 2015 as gracefully as Pagano?  This will be an interesting couple of weeks for a team that has seen its birthright as a perennial playoff participant taken by a deadly combination of injuries, mediocrity, and front office dissension.  The players are undoubtedly disappointed, and some will continue to say the right things as they rely on the process-first wisdom of Pagano.  Others may lash out against the organization and peers.  Adversity reveals character, and the environment for the Colts will be uniquely adverse.

4 – If you are a member of Stephen Morris’s family, you might get to see his first NFL action.  This morning, the Colts announced they have signed Morris – the former Miami Hurricane quarterback – from the Philadelphia Eagles practice squad.  Morris is now the equivalent of the speaker of the house in the constitutional line of succession behind a critically wounded president and fragile vice president.  What would be a more appropriate end to this strange season than Morris taking its final snaps as the last man standing between the Colts and Pat McAfee wrapping things up as its emergency QB?

3 – Rooting for a draft pick that might yield an elite player.  Losing in the NFL brings rewards, and come May the Colts will try their best not to blow a fourth straight first round pick.  If the Colts lose out, they could bounce into the top 10 of the draft, and a pair of wins might land them in the low 20s.  I will never recommend a team tanks remaining games after elimination from playoff contention, but a bright side to meaningless failure must be acknowledged.

2 – Without seeing the last eighth of the season, you can’t accurately appraise the work of GM Ryan Grigson.  Depending upon owner Jim Irsay’s feelings about his team, the debate among fans throughout the offseason will be whether injuries, Pagano, Grigson, or a combination of the three are to blame for a disappointing 2015.  Irsay is unlikely to believe he screwed this up, but fans can certainly throw his name into the mix of those culpable for Super Bowl dreams wobbling and then crashing in slow motion through 17 long weeks.  Who pays the price?  You have to watch to earn your right to voice an opinion.

1 – What the hell else are you going to do the next two Sundays at 1p?  Watching the Colts wrap up this strange season might be the best of a bunch of bad options, but it’s the last real Colts football you are going to be able to ‘enjoy’ for eight months.  We will languish through what so far has been a very warm Winter, slog through another wet Spring, and make it almost all the way through a golf-filled Summer before the Colts tee it up again.  As unpleasant as the 2015 season has been, it beats PBA action or watching the Patriots win more playoff games on thru January and into February.