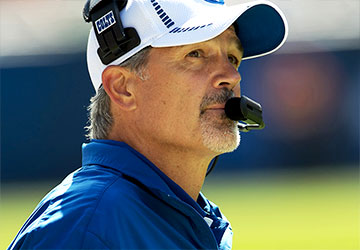 Chuck Pagano is awaiting word of his fate. I hope he is back for the 10 reasons below.

It is exceptionally likely that Chuck Pagano is going to pack his belongings today and leave the Colts practice facility for the final time.  Because his contract has expired, the Colts don’t need to fire him.  They just have to tell him thanks and goodbye.

I would like that to not be the case.

Winning is supposed to be the name of the game in the NFL, and only one coach has led the team he currently coaches to a higher percentage of wins than Pagano.

Until this aberrant season where the wheels fell off the cart and then rolled off a cliff, Pagano’s Colts had posted three consecutive 11-5 records and advanced to an additional level of the playoffs each postseason.

Pagano successfully battled cancer in his first year, and while that doesn’t win football games, it did build a bridge between fans and Pagano the human being that will be impossible to recreate with the next coach.

Sure, the Colts have been occasionally overmatched, outwitted, and out-fought.  While there are at least 10 reasons to keep Pagano as the coach, there are several to move forward without him.

As we are champions of the underdog, we won’t concern ourselves with the reasons to can Pagano – at least not today.  Here are 10 reasons to keep Pagano as the coach of the Colts:

10 – Pagano was hamstrung by GM Ryan Grigson demands – According to reports from many who cover the Colts and NFL, Grigson demanded that Pagano play Trent Richardson and others so that his trades/signings were perceived more positively.

9 – Marketing.  Pagano is a cancer survivor whose struggle inspired millions in central Indiana.  Some were Colts fans and others have become Colts fans, but everyone here became a fan of Pagano as he fought a very public battle.  Beating cancer won’t win a Super Bowl, but it does win fans among those who didn’t care one way or another about the NFL, and that affects the fanbase of a team that is also a business.  This would be a terrible standalone reason to keep a coach, but as a small factor among many larger, it should be on the dry erase board where evaluation details are scrawled.

8 – Who can you hire next to work with Grigson?  If reports of Grigson strong-arming Pagano to play draftees and players for whom he traded are true, why would a coach welcome that frustration into his life?  If I’m a coach, I want playing time decisions to be mine.  If those reports are true, Pagano being as well-respected as he is among players is a miracle of great leadership.  Grigson’s brand as a GM is one of a guy overmatched by the position who responds to questions about his roster with arrogant words and actions.  Are there a lot of great coaches out there who want to hitch their wagons to that?

7 – Because you will have to play against a team he coaches.  Pagano was good enough to lead the Colts to three straight trips to the postseason.  Is the brain trust of the Colts so sure they are going to be able to hire a harder working and more respected coach to beat him?

6 – 8-8 after three 11-5s has never gotten a coach fired before.  Pagano ranks second in winning percentage among current NFL coaches, and the Colts are going to fire him because he doesn’t get along with a GM who has blown three straight 1st round picks?

5 – Loyalty from players.  People tend to trash Pagano for being likable.  I don’t see him as well-liked, but as well-respected.  When players talk about Pagano, their eyes focus as though what they are telling you during an otherwise pedestrian interview is about to become important.

4 – Who in his right mind complains about 41-23?  The Colts won 16 straight in the AFC South, and that really helped create that gaudy won loss record over the past four seasons, but firing a coach over an 8-8 record seems ludicrous.  If Grigson feels the Colts are better off without Grigson, owner Jim Irsay needs to ask why and get a damn compelling answer.

3 – Season finale win was a sweet affirmation.  Sure, they took a pair of miserable ass-kickings at the hands of Jacksonville and Pittsburgh, which made Pagano look weak, but yesterday’s season finale was sweet vindication for Pagano.  Without an active QB who had been on a roster or taken a snap in an NFL game this season until yesterday, the Colts were very competent on the offensive side of the ball yesterday.

2 – 8-8 with the Colts roster is a success.  Given the lack of health on the Colts roster, going 8-8 is a hell of an accomplishment.  The Colts weren’t world beaters when Andrew Luck was on the field, but losing Luck certainly didn’t help the Colts cause.  The rest of the roster who missed meaningful time required players earmarked for a season on the practice squad to carry a lot of weight.

1 – Pagano didn’t buy the groceries.  The old coaches saying, “It’s the Jimmies and the Joes not the X’s and the O’s” applies for the Colts.  There is only so much Colts coaches could do to compel victory from this mediocre roster.  That’s not a swipe at Grigson as much as an admission that injuries were a huge component in the Colts recession to even-steven in 2015.

Excellent organizations – championship organizations – resist the temptation to tinker.  They hire the right guys for the right jobs and let them do their work unencumbered by well-intentioned reconfigurations.  The Patriots, Steelers, Giants, Packers, and Ravens have won 11 of the last 15 Super Bowls.  They are five of the most stable organizations in the NFL.  That’s not a coincidence.