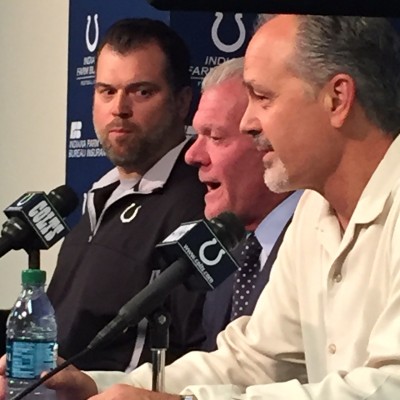 Ryan Grigson, Jim Irsay, and Chuck Pagano announce they together will continue to work toward a championship during the next four years.

“This is the best day of my life,” is how Chuck Pagano described the day that started with him likely to lose his gig and ended by announcing that he will be paid for four years to continue to serve as the head coach of the Indianapolis Colts.

The resolution of the uncertainty surrounding Pagano’s future with the Colts was certainly to his liking, but the drama surrounding it throughout the 2015 season couldn’t have been.

Lost in the joy that accompanied the announcement of Pagano’s extension is that Grigson was extended too – for three years beyond the upcoming year so Pagano and Grigson’s deal are synchronized to expire at the same moment.

It’s all water under over the dam now, but there are questions that went unasked and unanswered by owner Jim Irsay, general manager Ryan Grigson, and Pagano at the press conference.  These questions will linger as the relationship of Pagano and Grigson continues to be scrutinized – which is likely to be a long time given the obvious strain that has existed between them.

10 – How the hell did Pagano survive all this tumult to earn a four-year extension?   The same way the Colts rebounded to win that playoff game against the Chiefs after being down 28-points in the third quarter.  He never stops fighting.  When Pagano told the media last week that he would “work his ass off” to keep his job, he wasn’t kidding.  He got the team to fight without a rational reason Sunday against the Titans, and he won a few meetings today when his future was being decided.  One sure way to lose is to quit, and Pagano does not quit.

9 – Was yesterday a really good day for the Colts?  Sometimes the devil you know beats the devil you don’t know.  Pagano and Grigson aren’t perfect, but fans know that 11-5 and a trip to the AFC Championship Game is possible because it’s already been done.  Blowing everyone out opens the door for Irsay to hire a parcel of kooks to run things.  Irsay’s track record of hiring coaches and GMs has been pretty strong, so there is nothing to suggest he might go after Bears president Ted Phillips and Bruce Coslet to run the Colts show, but this way there is no chance of wacky hires.

8 – When did Irsay decide to keep Pagano?  There are reports the change came last week, but I think Irsay was swept up in the joy of the season finale and decided to get Grigson and Pagano together one last time to try to find common ground.  Grigson knew that no reasonably intelligent coaching candidate would take the gig without control of the roster, so he was amenable to talking, and with Pagano teetering on the brink of unemployment, he certainly was in no position to be petulant.  Both embattled execs moved to the middle.  That’s my guess.

7 – Is everything roses and buttercups at the Colts Complex?  Businesses are filled with egos and bread winners.  Screw with a man’s ego or take home pay, and the claws come out.  If making nice with one another is mutually beneficial, execs will play kissy face for the cameras, and then postpone their power grab until the scrutiny dies down..

6 – Can Pagano and Grigson work together moving forward?  There have been reports that Pagano and Grigson have endured long periods of silent acrimony during their time together.  Whether they can work together now has already been determined by agreements made during the hours of conversation they enjoyed yesterday.  If the peace was properly brokered by Irsay, they will work well together.  If not, we’ll know about it down the road.

5 – What do the players think of a three-year extension for Grigson?  It seems the players have little relationship with Grigson, but thoroughly respect Pagano.  I doubt the extension for Grigson means a lot to the current roster, unless they are relieved that the guy who hired them will continue in that position.  That doesn’t guarantee continued employment, but 31 GMs allowed Grigson to draft, trade for, or sign them, and in professional football that counts for something.

4 – Will this stability lead to a Colts world championship?  Who the hell knows?  Stability well-invested helps franchises win Lombardi trophies.  Constant renovation rarely brings success.  Look at the teams who change execs and coaches – Raiders, Browns, Bills, Dolphins, and more.  Losses are piling up for those teams faster than they can be counted.  Conversely, the Giants, Steelers, Packers, and Patriots are as stable as Queen Elizabeth II’s reign over the British Empire (maybe a bad example – it hasn’t been a good century for the empire).  They win championships – lots of championships.  If Rich Kotite had coached the Eagles for 25 years, they never would have won bupkis, but maybe Irsay is right in believing Pagano and Grigson can.

3 – Were media reports that the Colts planned to fire Pagano accurate?  When you deal with a single guy who can make and unmake a decision without oversight, anything can happen – and it did.  Only the reporters who assessed their information and addressed the odds of Pagano returning to the Colts as “zero” know whether they distilled the information given them correctly.  All I am left to do is appraise their work as I know them.  Every journalist covering the Colts does their job professionally, and I cannot imagine a scenario where any would fabricate perspective from thin air or grind an axe against anyone.

2 – Were changes made to the construct of the front office?  Reports – and I believe them – described Grigson as a boss who demanded that Pagano play certain Colts despite Pagano’s misgivings.  Was this situation addressed by Irsay during the day long meetings that resulted in the gleeful 10:30p press conference?  It will be interesting to monitor roster changes and player use next season to see if Pagano has gained any authority.

1 – Why did the extension happen now instead of 11 months ago?  The Colts finished three straight seasons 11-5 and advanced an additional postseason level after each.  Why was Pagano forced to twist in the wind through the 2015 season before being deemed worthy of an extension – especially after coming off an 8-8 season that finished far short of expectations regardless of injuries.