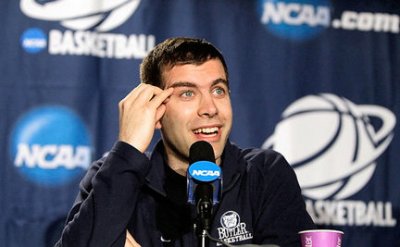 Brad Stevens is a good man – a really good man.

Yesterday afternoon we heard Boston Celtics coach Brad Stevens would miss his team’s  game last night to tend to a personal matter in Indianapolis.  We know now that he came home to visit Andrew Smith, one of his former players who is battling cancer.

Stevens would prefer no one knows why he is in Indianapolis, but there is no stopping the media from getting the answer to a question like why a coach is taking a game off.

If you are lucky, you might meet five truly good people during your life.  Some people are very smart, many make us laugh, others are strong, a few are superior athletes, but very few are simply good.

Stevens is one of those people, and that is why he was in Indianapolis.  He was here to share of himself without celebration with a young man to whom he will always be tethered through their relationship as coach and player at Butler University.

These are the 10 reasons I love and respect Brad Stevens:

10 – Calling timeout so my son could play.  Ryan was a freshman at Loyola-Chicago, and the Ramblers came to Hinkle Fieldhouse to play Butler.  This was Ryan’s first game in Indy since heading to Chicago, and his coach asked him to report into the game with a minute-and-a-half left.  Loyola was down 14, so the game was over for all intents and purposes.  It became clear with 40 seconds left there would be no stoppage of play that would allow Ryan to enter the game.  Brad called timeout, and waved his team back onto the floor without a huddle.  Ryan played.  After the game I thanked Brad for calling the timeout, and he said the ref misheard him when he yelled something else.  Not only did he do a nice thing for a local kid, he denied responsibility.

9 – Brad approaches others before they seek him out.  When Brad was an assistant coach for Butler, he sought people out to say hello and catch up.  As Brad is the head coach of the Boston Celtics, Brad still seeks out people to say hello and catch up.  Parents of his players at Butler have told me that a couple or three times a year he would call just to talk – not to check up on a player away from campus, but just to touch base.  Just because he cared.

8 – Still treats Butler players as his.  There are many coaches (and managers in business) who leave old relationships behind when they take a new job.  Brad is there for those who played for him at Butler – as evidenced by his attendance at Matt Howard’s wedding 18 months ago, and his presence last night with Smith as he fights for his life.

7 – Never draws attention to his good deeds.  There are coaches who can’t stop telling others about the very good things they do for others.  It’s not necessarily a selfish impulse – maybe they are trying to motivate others to do likewise.  Brad does the right thing relentlessly as quietly as the coach of the Boston Celtics can.

6 – He would rebound for his players at Hinkle Fieldhouse.  I walked into Hinkle for a meeting at Hinkle six years ago, and peeked into the gym.  There was Shelvin Mack putting up shots with some skinny guy in a tee shirt and shorts rebounding.  I thought, “Man, that team manager has a confident air about him.”  I walked closer, and saw that the manager was Brad.  This wasn’t some kind of extensive instructive workout – just a player shooting and a guy quietly shagging.  There aren’t a lot of head coaches doing managers work outside practices and scheduled workouts.

5 – Put players’ education ahead of his own comfort.  To accommodate the class schedules of his players, Brad scheduled daily practice from 6a-8a every weekday during a season five years ago.  Coaches generally tell players when practice will be, and it’s the student-athletes’ responsibility to schedule around it.  Brad and his staff dragged their asses out of bed at 5a every day to accommodate players so they could earn meaningful degrees.

4 – Asked about Joe Hughes before anything else.  Brad spent a lot of time watching the summer team for which future Butler players Matt Howard and Zach Hahn played.  My son played on the team too, as did Joe Hughes, who went on to compete for four years at Xavier University before successfully battling cancer.  At Matt’s wedding reception, I was talking to Zach’s dad, and Brad walked toward us.  Instead of making inane small talk or asking about our kids, he asked, “How’s Joe Hughes doing?”  We told him Joe came through his fight with a clean bill of health, and talked about everything but the Celtics and basketball.

3 – Showed up at 8a AAU games, 10p AAU games, and every game in between.  There were two coaches who sat through every game during an open period the summer before the senior high school season for the team Matt and Zach played.  Brad was an assistant at Butler, and he attended them all regardless of the time.  Dane Fife was the other when he was the head coach at IPFW.  Brad helped Todd Lickliter win commitments from Matt and Zach, while Dane got Ben Botts, who was criminally under-recruited.  Brad and Dane did the work and they earned prizes that helped make them successes.

2 – Left lucrative career at Eli Lilly to pursue his dream.  Indulging a dream while turning away from the potential for big vats of cash shows the mettle of a special man.  Brad never had an inkling that he would be in a position to succeed at the level he has when he walked out of the Lilly campus in Indianapolis, home of one of the most profitable pharmaceutical firms in the world.  He followed his dream, worked incredibly hard, and coached in two national championship games at Butler before being tabbed for one of the most unique coaching positions in all sports.

1 – Brad never does good with an agenda.  There are two kinds of people who do good things – those who consciously strive to do good for a variety of reasons (many noble), and those who do good because it is who they are.  Brad is one of those very few people who inhabit the rarified air of the latter.  John Wooden said, “The true test of a man’s character is what he does when no one is looking.”  Because I am a suspicious sort, I try to look when no one else is, and I’ve never seen Brad be anything but a good man doing the right thing.

Brad was a great college basketball coach because he is the kind of adult parents would like their children to be.  That’s why I believe he’ll return to college coaching.  He will realize that he can make the world a better place 15 young men at a time, and that will bring him back.

I know.  Brad Stevens sounds too good to be true.  Nope.  Just good and true.