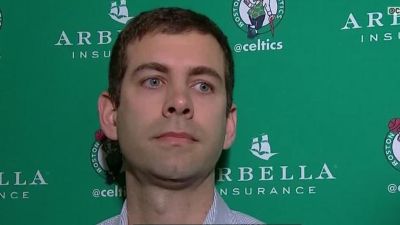 Brad Stevens speaks to the media about Andrew Smith.

We were tragically reminded yesterday of the bond that continues to exist between Brad Stevens and the players he coached at Butler University prior to his accepting the job as coach of the Boston Celtics.

Brad visited Andrew Smith  last week to say goodbye, and spoke of his passing with eloquence and raw emotion in a pregame press conference prior to yesterday’s Celtics vs. Knicks game.

Brad’s love for a former player and his family brought to mind the need for more collegiate leaders to profoundly connect with students as they evolve into adults.

10 – Losses in back-to-back NCAA Championship games left a mark.  Brad’s Bulldogs were less than an inch from a National Championship upset for the ages when Gordon Hayward missed a buzzer beating three-pointer from half court against Duke at Lucas Oil Stadium.  That leaves some business undone for Brad.  Coming back to college to right that wrong might be a silly reason to leave the Celtics, but combined with the next nine reasons, maybe it swings the balance.

9 – Brad’s from Indiana – the epicenter of college hoops  Sure, we love the Pacers – who play in the state capital – but Indiana is a college basketball state.  There are ten D-1 basketball programs in the Hoosier State (Valpo, Notre Dame, IPFW, Purdue, Ball State, Indiana State, IUPUI, Butler, Indiana, and Evansville).  Brad played at Zionsville High School and DePauw University, and attended IU games at Assembly Hall with his dad.  College hoops is in Brad’s blood.

8 – Chasing money and prestige is crass.  Okay, that’s a little strong.  Being the coach of the Boston Celtics is a very cool thing.  Can’t argue with a basketball coach dreaming of holding that position with an iconic team, but Brad’s greatest gift is the imprint he leaves upon those he meets.  Coaching isn’t a business to Brad – it’s a vocation.  The best place for his incredible and unique skill set is in college.

7 – Parents want their kids to be like Brad.  One of the biggest components of making the decision where a high school kid goes to college is the trust a parent feels for the adults in charge.  When a player is recruited to play for a coach in any sport, the trust parents feel for a coach is the biggest priority.  Brad was trusted by parents like few others.  That’s a huge advantage for Brad, and it is wasted in the NBA.

6 – Brad is an educator.  High school and college coaches should view themselves as educators first.  The players they mentor are students, and athletics are a significant tool in bringing men and women to adulthood.  Winning, brand building, and revenue are all priorities too, but the word “education” should appear in the mission statement of every enterprise on a college campus.  Every employee should be an educator.  Brad is one of the best.

5 – College hoops needs a serious infusion of humility.  There is a lot of preening among both coaches and players in college basketball – as though the result of the game pales in comparison to the fleeting glory of a Sportscenter highlight play.  Brad recruits and congeals groups uniquely focused on team goals.  His skill in those two areas is the only reasonable explanation for back-to-back National Championship game appearances by his Butler teams.

4 – Brad’s players are still his highest priority.  When Brad missed a game last week to come to Indianapolis to say goodbye to Andrew Smith, when he honored a commitment to ride in a Connersville parade after accepting the Celtics gig, and when he attended Matt Howard’s wedding and reception in Connersville 18 months ago, he showed his continuing commitment to former players in profound way rarely seen in leaders.

3 – There is more to life than basketball.  Conveying a basketball through a hoop is a odd and useless thing to be great at, and the ability to teach men to do it is a bizarre job.  Using basketball to impart life lessons is more worthy of a man like Stevens.  Stevens recruited great kids to play at Butler, put them in a position to succeed on the court at a high level, but his greatest achievement exists in the men currently succeeding at all facets of life as Butler grads outside basketball.

2 – His lessons are wasted on NBA players.  Some people are special not because of what they accomplish, but through the lessons they convey to others.  The NBA is a men’s league with players trying to earn another ludicrously lavish contract.  Learning from the value system employed by Stevens is not among the priorities of those on the Boston Celtics roster.  Sure, Stevens is an outstanding tactician, stat cruncher, and motivator, but his greatest gift is in inspiring young men to be better grown men.

1 – Brad is the George Bailey of hoops.  With It’s a Wonderful Life still fresh in our heads from holiday viewing, what better a comparison to Brad Stevens.  In that film, we see how George’s selflessness impacts the lives of virtually everyone in Bedford Falls – even gruff old Mr. Potter.  Brad coming back to college hoops might not fulfill his dreams, but it would have a Baileyesque effect on those he touches in college hoops.

Maybe Brad comes back to college one day.  Maybe he doesn’t.  What he needs is not for us to say, but that college basketball needs him is evident with every chest thump from a kid who dunks down 25, each ill-tempered tirade from a supposed educator, the many defensive possessions where five kids are playing three different defenses, and when coaches run players off campus to reclaim a scholarship better used on a more talented player.